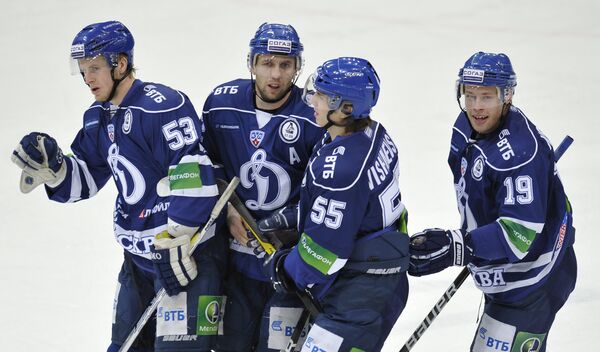 © RIA Novosti . Alexey Kudenko
/
Go to the photo bank
Subscribe
Dynamo Moscow was like a “bomb” that tore SKA “to shreds” in an emphatic 4-0 series victory to book a place in the Gagarin Cup final, Dynamo wing Denis Tolpeko told RIA Novosti on Wednesday.

Dynamo Moscow was like a “bomb” that tore SKA “to shreds” in an emphatic 4-0 series victory to book a place in the Gagarin Cup final, Dynamo wing Denis Tolpeko told RIA Novosti on Wednesday.

Dynamo scraped narrow wins in the first three games of the Western Conference final series before a 6-1 thrashing of pre-series favorite SKA in Moscow on Tuesday, with Tolpeko setting up Mikhail Anisin for the sixth goal.

“A real bomb, right. We ripped them to shreds. Hey, I’m only joking,” the ex-Philadelphia Flyers player said.

“We played resiliently, from defense, very strict, without any risks, disciplined. And all that put together gave us the result overall,” he said.

Russia’s oldest team benefited from some good fortune in its quest to be the first Moscow team to reach a Gagarin Cup final, he added.

“Somewhere luck was on our side too,” Tolpeko said.

Dynamo will face either Avangard Omsk or regular-season champion Traktor Chelyabinsk in the final, with Avangard leading 3-1 in the Eastern Conference final series.

Moscow-born Tolpeko started his professional career with Russian team Vityaz Podolsk before moving to North America, where he played 26 games for the Flyers after several seasons in the junior leagues.

He moved to Dynamo in 2008 for the Moscow team’s first season in the newly formed KHL and has since played 151 games, racking up 29 goals and 21 assists.