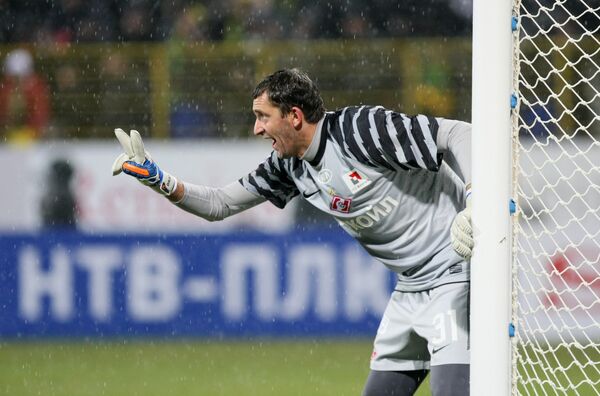 © RIA Novosti . Said Tsarnaev
/
Go to the photo bank
Subscribe
Ukrainian goalkeeper Andriy Dikan extended his contract with Spartak Moscow by a year to 2013 on Wednesday, days after suffering severe facial injuries while playing for the club.

Ukrainian goalkeeper Andriy Dikan extended his contract with Spartak Moscow by a year to 2013 on Wednesday, days after suffering severe facial injuries while playing for the club.

His contract with Spartak had been due to expire this summer, but will now run until the end of the 2012-13 season.

“We’ve extended our contract with him. That means that we will see Andriy in the Spartak goal for another year,” Spartak coach Valery Karpin said on the club’s website.

“Dikan’s proved by his performance that he is a leading goalkeeper in the Russian championship.”

Dikan is resting in bed at home in Moscow awaiting an operation in Germany next week, and Karpin said he had the club’s full support as he recovers.

“We value people who serve Spartak professionally, loyally and honestly. And we understand how important the support of the club is now, at this hard time for him,” he said.

“We are doing and will do everything in our power, so that Andriy returns to the football field as soon as possible.”

Dikan joined Spartak from Terek Grozny in 2010 and has played 32 times this season.

He has three caps for Ukraine, most recently against Uzbekistan in June, and was in contention to play at Euro 2012, which Ukraine is jointly hosting with Poland.