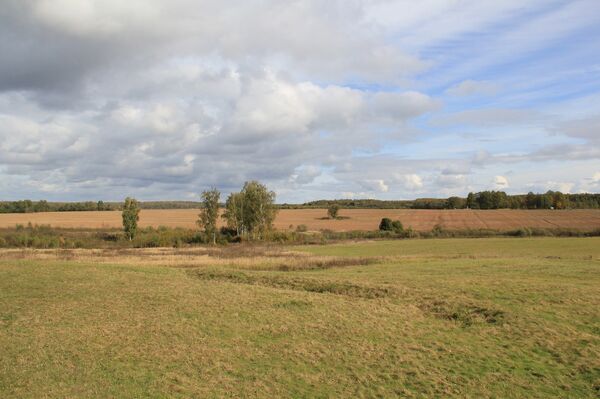 © RIA Novosti . Tatiana Shevtsova
Subscribe
The Kremlin has demanded that squatters be removed from around the historical site of the Borodino battlefield, ahead of a planned reenaction later this year in honor of the 200th anniversary of the engagement, after which Napoleon occupied Moscow in 1812.

The Kremlin has demanded that squatters be removed from around the historical site of the Borodino battlefield, ahead of a planned reenaction later this year in honor of the 200th anniversary of the engagement, after which Napoleon occupied Moscow in 1812.

The battle fought on September 7, 1812, was the largest and bloodiest single-day action of the French invasion of Russia and all Napoleonic Wars, involving more than 250,000 troops and resulting in some 70,000 casualties.

The area is a federal landmark and part of the 1812 Civil War museum/reserve.

“Serious problems are involved in the restoration of the historical look of the Borodino field,” Presidential chief of staff Sergei Ivanov said.

Ivanov called for the demolition of illegal structures built in the area, the relocation of squatters from around the Borodino Museum area, and “the museumification of this holy place,” he said.

He admitted that little has been done so far, while “attempts to build private housing projects on the Borodino field are ongoing.”

Investigators say more than 100 illegal houses and other structures have been illegally built within the reserve.

The reenactment of the battle of Borodino is conducted every year but this year it is going to be celebrated on a grand scale, although details of the upcoming celebration are still limited.

According to reports by bloggers claiming to be involved, it will include events at the monuments to the French (the Grande Armee at Shevardino) and then a reenactment without spectators as Russians and French troops march through the woods from different points to a meeting point.

Russian Deputy Foreign Minister Gennady Gatilov proposed that foreign heads of state and government not be invited to attend the celebrations due to “the controversial interpretation of the 1812 events by some European states.”

Ivanov challenged the proposal, saying: “What states are you talking about - those that did not exist 200 years ago?”

Gatilov said that referred to France and a number of other modern European states.

“We can’t invite Austro-Hungary but we can invite Austria,” Ivanov said, adding that the level of foreign representation required further consideration.