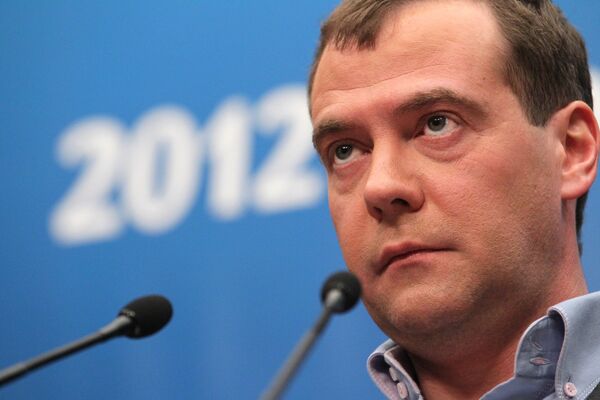 Russian President Dmitry Medvedev has disagreed with the presidential human rights council’s view on pardon of convicts in questionable cases, the head of the council Mikhail Fedotov said.

The council on March 15 submitted to Medvedev a legal advice that the presidential pardon does not need an admission of guilt or a plea from a convict.

“We have submitted a recommendation of ten experts on constitutional law. He [Medvedev] disagreed with them,” Fedotov told RIA Novosti late on Monday.

“The president said in his rejection note that he does not understand why he should pardon a person who never asked him for it,” the official added.

Fedotov did not rule out the possibility that the pardon issue could be discussed with the outgoing president during his final meeting with the council on April 28.

“It is possible because during the meetings with council members the president sets up a simple rule – everyone openly speaks his or her mind,” he said.

The presidential human rights council is known for its independent stance but it has no legal authority and had its recommendations ignored in the past.

On March 5, Medvedev ordered the Prosecutor General’s Office to probe the legality of the verdicts handed down to 32 prisoners, including former Yukos head Mikhail Khodorkovsky and his business partner Platon Lebedev.

Spokesperson for the Prosecutor General’s Office Marina Gridneva said on Monday that some of the high-profiled cases, including those of Khodorkovsky and Lebedev, had been checked but did not disclose the conclusions made by prosecutors.

Russian opposition hoped that Khodorkovsky and Lebedev, who have been jailed since 2003 on fraud and tax evasion charges, could be pardoned by May 7, the president-elect Vladimir Putin’s inauguration day.

However, Medvedev’s reaction to experts’ recommendation on pardon makes this possibility unlikely, as both men have refused to recognize their guilt.