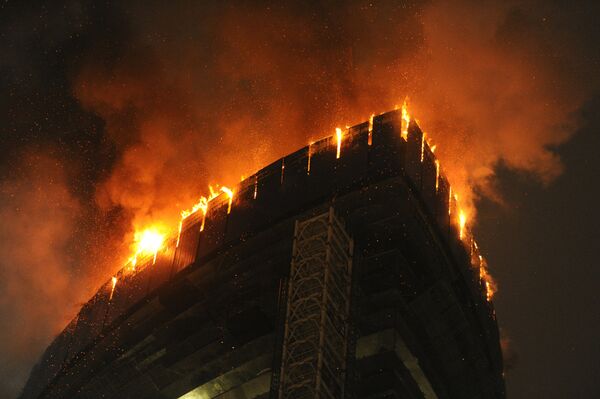 © RIA Novosti . Alexey Filippov
/
Go to the photo bank
Subscribe
A blaze on two upper floors of a skyscraper under construction in Moscow has been put out, a law enforcement source told RIA Novosti on Tuesday

A blaze on two upper floors of a skyscraper under construction in Moscow has been put out, a law enforcement source told RIA Novosti on Tuesday.

“The fire was extinguished around midnight,” the source said. “No casualties have been reported.”

The Russian Emergencies Ministry later confirmed that the blaze had been put out and there was no threat of the building collapse.

The fire broke out just before sunset at 8:00 p.m. in the Federation Tower, which will be Russia’s tallest building at 93 floors upon completion in 2013. It spread over the 66th and the 67th floors of the building covering about 300 square meters.

The fire has been fueled by the insulation, tarpaulins and other construction supplies and materials located on the top floors of the unenclosed structure, and has been fanned by high winds.

Moscow firefighters, who initially had to climb on foot to the 66th floor to set up water pumping systems, were later joined by three Ka-32 and a Mi-26 helicopters in a valiant effort to put out the blaze.