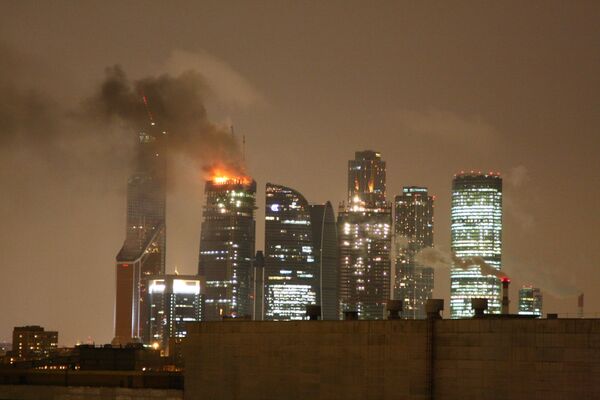 © Photo : Elena Son
Subscribe
A firefighting helicopter has been dispatched to help put out a blaze on the 67th floor of a skyscraper under construction in Moscow.

A firefighting helicopter has been dispatched to help put out a blaze on the 67th floor of a skyscraper under construction in Moscow.

“A Ka-32 helicopter will be deployed to extinguish the fire,” a law enforcement source told RIA Novosti.

The fire broke out just before sunset at 8:00 p.m. in the Federation Tower, which will be Russia’s tallest building at 93 floors upon completion in 2013.

The blaze currently covers about 300 square meters, Rossiya 24 television reported. That is up from 50 square meters reported earlier by the city emergencies ministry, but Rossiya 24 said the size of the blaze seems to be diminishing, mainly due to the efforts of the water-dumping Ka-32.

The fire is being fueled by the insulation, tarpaulins and other construction supplies and materials located on the top floors of the unenclosed structure, and is being fanned by high winds.

There have been no casualties from the fire so far, an emergencies ministry official told Rossiya 24.