Technical Failure Most Likely Cause of Siberia Crash - Experts 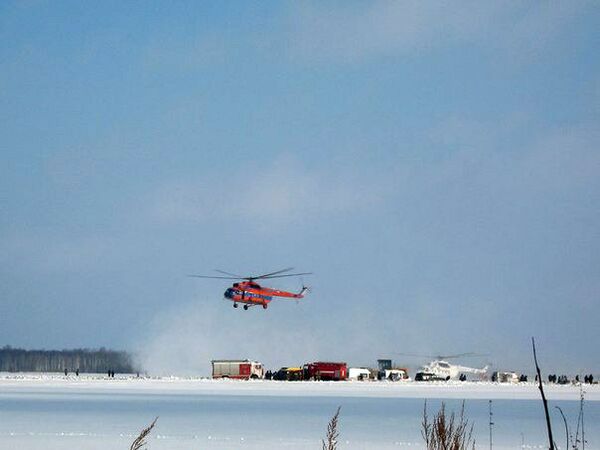 Investigators consider technical failure as the most likely cause of Monday’s crash of a UTair ATR 72 aircraft near the western Siberian city of Tyumen, Russian Investigative Committee spokesman Vladimir Markin said.

“Witness statements that smoke was coming from the plane's engines support this version,” he said. “Besides this, the behavior of the crew, who turned the aircraft back towards Tyumen airport virtually immediately after take-off, also supports this theory.”

The turboprop ATR 72 airliner crashed some three kilometers from Tyumen’s Roshchino Airport while trying to make an emergency landing in the early hours of Monday, UTair said. At least 31 people onboard were killed and 12 others have been hospitalized with serious injuries.

The captain of the ATR 72 decided not to have the aircraft treated with anti-icing liquid before taking off from Tyumen, Lifenews said, quoting the airport's deputy director, Vladimir Nyesmachny.

“Usually the captain of the aircraft makes the decision, as is his right,” Nyesmachny said. “If he considers that the aircraft needs deicing, specialists are called in. In this case, it was not done,” he said.

According to Roshino airport’s standing instructions, aircraft must be deiced if there is any precipitation at the time of take-off.

Icing has been attributed as the cause of two earlier fatal crashes involving the ATR 72.

Aerocaribbean Flight 883 crashed in bad weather in the Cuban province of Sancti Spiritus in November 2010, killing all 68 on board. Cuban officials said “extreme meteorological conditions” caused the craft to ice up at an altitude of 6,100 meters.

In October 1994, American Eagle Flight 4184 crashed due to ice which had built up on the wings, killing all 68 on board. The aircraft entered a spin while after flying through supercooled cloud and rain before crashing in a soybean field near the town of Roselawn, an official report said. The crash was the worst accident involving an ATR 72, according to the Aviation Safety Network website.

Icing was also blamed for causing the crash on take-off of a Challenger 604 business jet near the Kazakhstan city of Almaty in 2007 after the crew decided not to turn on the on-board deicing, according to a MAK report.

There was no rain or snow overnight on Monday at Roshchino in the hours leading up to the crash, but temperatures were around zero and visibility was low due to high humidity according to local weather forecasts.

Aviation safety analyst David Learmount from Flight International magazine says the conditions at the airfield could have contributed to the accident.

"If the air temperature was at zero or below during the taxi out and take-off, and if the aircraft had been parked in the open overnight but not de-iced before flight, there would be a risk of ice and/or frost on the airframe," he said. "Ice on the airframe increases the aircraft's weight and, especially if the wing and tail leading edges and upper surfaces are contaminated with ice, it changes their aerodynamic efficiency, increasing drag and decreasing lift."

Even a few millimeters of ice forming on a wing can cause separation of the smooth airflow over its surface that provides the lift that keeps it in the sky. Ice can also break off engine intakes and cause engines to lose power, or interfere with the control surfaces on the wings and tail that the pilot uses to control the aircraft.

The ATR 72 is a high-wing, T-tail design, so the pilots would not have been able to see the top of the wing and tail from the cockpit or the ground.

Experts have been studying data from the UTair plane's “black box” flight recorders and fuel samples recovered from the aircraft wreckage, Markin said. Terrorism has been ruled out.

Pilot error or ground control error are also being considered as possible causes of the tragedy.

Federal Air Transportation Agency head Alexander Neryadko dismissed on Monday evening both icing and faulty fuel as possible causes of the crash, but said the check was ongoing.

UTair director Andrei Martirosov said that crew fatigue should also be ruled out because both pilots were "well-rested."

Sergei Antsin, the pilot-in-command of the crashed plane, was a “responsible” and “highly professional” person, one of his former aviation school classmates said, noting that he was not entitled to comment on whether pilot error could be a possible cause of the crash.

“No one could ever imagine that such thing could happen to Sergei, that he could make a mistake. He was smart and successful in his studies,” he said.

“You can do everything right, just the way it is written in the flight manual, and get an absolutely unexpected result. None of us pilots is guaranteed against it. Investigation will show what happened there,” he said.

Antsin died the day before his 28th birthday. Second pilot Nikita Chekhlov was only 24 years old.

Investigators have also seized documents from UTair-Engineering, the company in charge of monitoring the aircraft’s technical condition, Markin said.

The plane, produced by the French-Italian manufacturer ATR in 1991, performed its first flight in 1992 and had flown 35,000 flight hours, he said. It underwent a full-fledged technical examination in Germany in 2010, and a regular check in Tyumen two months ago.

UTair has three ATR planes made by the French-Italian manufacturer ATR, according to its website.

The European experts will work together with experts from the Moscow-based Interstate Aviation Committee (MAK) who have flown to the site.