Six Theories on the Loss of the Titanic 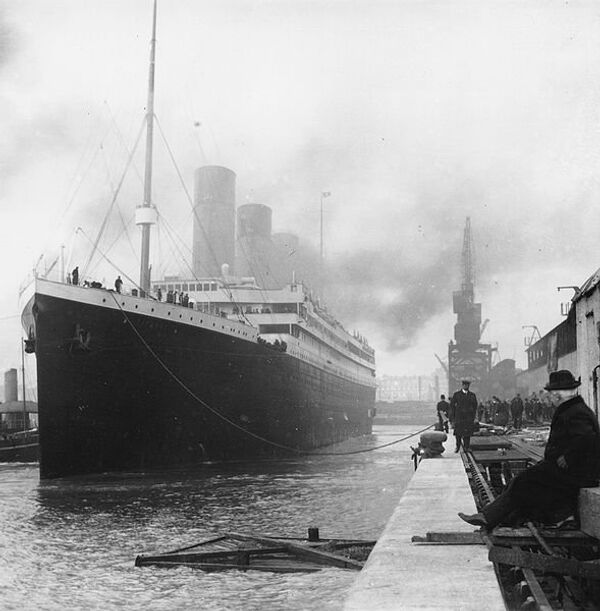 © Photo : Public Domain
Subscribe
The official theory implies that the Titanic disaster was caused by the ship traveling at a high speed, rather than just by its collision with an iceberg. Below are six alternative causes of the accident advocated by mystery lovers worldwide.

The super-liner RMS Titanic struck an iceberg at 11:40 p.m. on April 14, 1912. The glancing blow damaged a 100-meter long starboard section of the hull, and water rushed inside its first five supposedly water-tight compartments. At the same time, water seeped inside the sixth compartment. The cargo hold was divided into 16 reportedly water-tight compartments, whose bulkheads, however, were not hermetically joined to the deck above. Consequently, the compartments were flooded in succession. The ship gradually settled by the bow, which eventually disappeared under the water. This was what caused the disaster.

But the sinister appeal of the Titanic story lies in the fact that far from everyone agrees with the official theory. Other exotic explanations are also offered.

The official theory implies that the disaster was caused by the ship traveling at a high speed, rather than just by its collision with an iceberg.

Below are six alternative causes of the accident advocated by mystery lovers worldwide.

1. A fire reportedly started inside the coal bunkers even before the ship sailed. The fire subsequently triggered an explosion and caused the liner to hit an iceberg. This theory has existed for years. Ray Boston, who has researched the Titanic story for over 20 years, offers new evidence to corroborate it. Boston claims that a fire started inside the sixth compartment on April 2 and it was never extinguished. The owner, John Pierpont Morgan, decided that the Titanic would quickly reach New York and allow the passengers to disembark, and the fire would then be put out. The liner set sail with a fire on board, and an explosion subsequently occurred during the trip. Captain Edward John Smith feared his ship might blow up even before reaching New York. This explains her high speed at night when the risk of hitting ice formations was particularly high. Despite ice warnings received by the Titanic’s wireless telegraph operators, Captain Smith did not order the ship to slow down. Consequently, the Titanic hit an iceberg.

2. According to a conspiracy theory, it was not the Titanic that sank on April 15, 1912. This theory was put forward by Robin Gardiner and Dan Van Der Vat, the authors of The Riddle Of The Titanic. They believe it was RMS Olympic, the Titanic’s sister ship, that sank in the early hours of April 15, 1912. Both ships had an almost identical appearance. On September 20, 1911, the Olympic collided with HMS Hawke, a Royal Navy cruiser, with both ships receiving serious damage. The Olympic’s owners incurred major losses because the damage was not sufficient to collect insurance payments. The theory revolves around a hypothetical fraud, which reportedly allowed the Titanic’s owners to obtain insurance payments. They deliberately directed the Olympic into an area teeming with icebergs and persuaded the captain not to reduce the speed, so the ship would sustain grave damage after hitting an iceberg. This theory was initially corroborated by the fact that numerous objects raised from the Titanic disaster site could not be linked to the ship. The theory was refuted after ship parts stamped “401,” the Titanic's hull number, were lifted from the bottom of the Atlantic Ocean. The Olympic’s hull number was “400.” The Titanic’s hull number was also found on the ship’s propeller. Nonetheless, the conspiracy theory still has supporters.

3. The Titanic was allegedly torpedoed by a German U-boat. Some Titanic buffs claim that the iceberg did not sink the liner, and it was destroyed by a German U-boat, which fired a torpedo. They say this was done to collect on the insurance policy. The U-boat commander, who had agreed to take part in the plot, was reportedly related to one of the Titanic’s owners. But this theory is not backed by any solid evidence. Both the passengers and the crew would have noticed a torpedo slamming into the ship.

4. It was the Curse of the Pharaohs. Lord Canterville, a historian traveling aboard the Titanic, had with him a sarcophagus containing the mummy of an ancient Egyptian priestess. As the mummy had immense historical and cultural value, it was placed near the bridge, rather than inside the cargo hold. Those supporting the theory allege that the mummy had affected Captain Smith’s reasoning. Consequently, he disregarded numerous ice warnings and did not order the ship to slow down, thus dooming her to a disastrous end. This theory is corroborated by well-known incidents when treasure-hunters and archeologists who disturbed ancient graves, primarily those of mummified Egyptian kings, later died of mysterious causes. Those affected by the curse behaved erratically and often committed suicide. So, did the pharaohs really help sink the Titanic?

5. One of the helmsmen reportedly made a steering blunder, which sent the Titanic to the bottom of the ocean. This recent theory deserves special mention. In her novel, Good as Gold, Lady Louise Patten, the granddaughter of the Titanic’s Second Officer Charles Lightoller, claims that the crew had plenty of time to steer clear of the iceberg. But Quartermaster Robert Hichens, the man at the helm, panicked and turned the wheel the wrong way. The catastrophic mistake resulted in a collision with an iceberg, which caused fatal damage to the ship. The sensation, which was revealed almost 100 years after the disaster, was kept secret until that time by the family of Lightoller, the most senior officer to survive the Titanic's sinking. In fact, Lightoller was the only person to know the real cause. But he concealed the information because he feared that the owner, White Star Line, might go bankrupt, and his colleagues would lose their jobs. Lightoller’s wife Sylvia was the only person to know the truth. She eventually told her granddaughter about the steering blunder. Lady Patten claims that the Titanic, a huge and reliable liner, sank relatively quickly because she failed to slow down right after the collision. Consequently, the moving ship received hundreds of times more water than would otherwise have been the case. The liner was not promptly stopped because Bruce Ismay, the chairman and managing director of White Star Line, had persuaded Captain Smith to continue the voyage. Ismay feared that his company might incur serious material losses due to the incident.

6. Another theory alleges that the Titanic wanted to win the Blue Riband, a prestigious prize awarded to a liner for making the fastest North Atlantic crossing. There remain many proponents of this theory, mostly writers because it originated in the writing community. In 1912, the Blue Riband prize was held by RMS Mauretania of the British Cunard line, which instituted the prize. The Cunard line was also the main rival of White Star Line. The theory’s proponents claim that Bruce Ismay, the president of White Star Line, urged Captain Smith to arrive in New York a day earlier than planned to receive the prize. This supposedly explains why the ship was traveling so fast in a dangerous sector of the Atlantic. But this theory can be refuted easily because, unlike RMS Mauretania, the Titanic could not have reached the record-breaking speed of 26 knots. Incidentally, RMS Mauretania's record stood for over 10 years after the Titanic disaster.