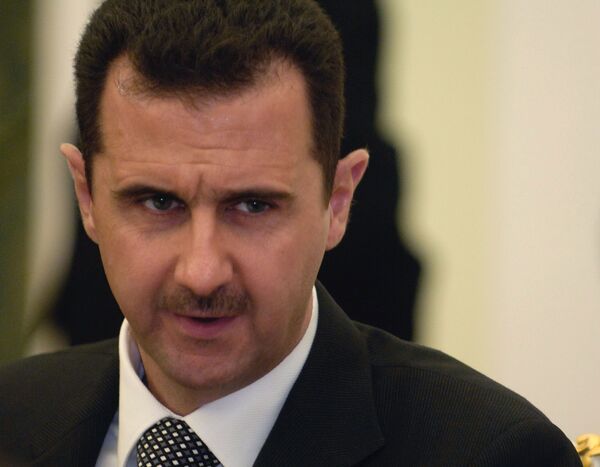 © RIA Novosti . Sergei Guneev
Subscribe
The Arab League foreign ministers who met in Baghdad on March 28-29 failed to sway the Syrian authorities. A day after the opposition was defeated in Homs, Bashar Assad’s foreign minister said that Syria would not talk with the League of Arab States, which had suspended Syria’s membership.

The Arab League foreign ministers who met in Baghdad on March 28-29 failed to sway the Syrian authorities. A day after the opposition was defeated in Homs, Bashar Assad’s foreign minister said that Syria would not talk with the League of Arab States, which had suspended Syria’s membership.

The Syrian president does not appear frightened by the possibility of isolation from the Arab world. He still has the backing of Russia and China, while the former UN Secretary General Kofi Annan is acting as an intermediary in his dialogue with Arab nations and the West.

Russia and China may review their stance

According to the UN, the armed confrontation between the Syrian government and the opposition, which started a year ago, has claimed over 9,000 lives. Yet Bashar Assad feels confident and does not plan to exit the political stage. The fighting in Homs, Idlib, Rastan, Daraa and other cities goes on, and the government forces clearly have control over the country.

Nothing will change as long as Assad has the support of some of the world’s leading powers. Meanwhile, Russia has moved closer to the West’s stance, expressing support for Annan’s peace plan, which stipulates a daily two-hour ceasefire for delivering humanitarian aid and evacuating the injured.

President Dmitry Medvedev highly praised the mission of Kofi Annan, who represented both the UN and the Arab League.

“I really believe that this is very likely the last chance to prevent the escalation of the civil war, which could have fatal consequences for Syria,” he said.

Kofi Annan’s plan consciously omits the main demand of the Syrian opposition and the West – that Bashar Assad must step down. This is why the Damascus authorities have accepted it so readily. But Assad is unlikely to accept the provisions on stopping all violence, releasing all political prisoners, and ensuring freedom of association, peaceful demonstrations and journalists’ access to the country.

Assuming that the Syrian army withdraws from rebel cities and stops fighting the opposition, the “peaceful” opposition will disarm the government security forces, take over government buildings and police stations and convince the armed forces to join them. This is why Russian diplomats insist that not only Assad but the opposition must honor all provisions of Annan’s peace plan.

“In this regard, it is extremely important that the Syrian opposition groups follow the example of the Damascus authorities and clearly announce their support for the UN-approved peace plan put forward by the UN and Arab League envoy,” reads the statement by Alexander Lukashevich, the official spokesperson of the Russian Foreign Ministry.

This is a very difficult choice. In recent Russian history, the Chechen war was described as both a counterterrorism operation and a civil war, and either definition is applicable to Syria. The point at issue is who is fighting who, and who is stronger militarily.

The Alawi (Bashar Assad and his circle) constitute a small part of this majority Sunni country. Yet far from all Sunni Muslims want Assad to go. His main opponents are Islamic radicals and the Muslim Brotherhood movement outlawed in Syria and lavishly financed by the Gulf monarchies, in particular Qatar and Saudi Arabia.

Information from Syria is scant and contradictory, but according to witnesses the split between Assad’s supporters and opponents in society is 50-50 or 60-40 – the ratio keeps changing. Some of Assad’s former opponents have joined his supporters to stop the killing, war and destruction, whereas some of his supporters have taken up arms to fight the president.

It appears that the civil war in Syria will last very long, unless the West and the Gulf monarchies launch a military or “peacekeeping” operation, disregarding the UN Security Council’s stance. Even if Bashar Assad stays in power, the war will weaken him politically and force him into a corner, as in the case of Saddam Hussein and Muammar Gaddafi before him.

On the other hand, he can peacefully step down if offered an immunity deal similar to the one extended to the Yemeni president. The West and the Arab League have clearly not yet reached their limit of patience, and Assad still has a chance to make a political decision.