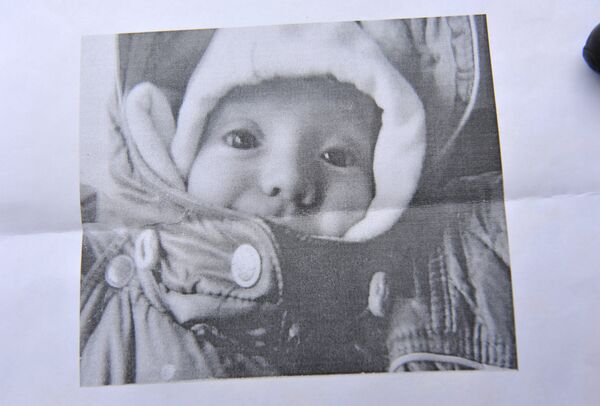 © RIA Novosti
Subscribe
When nine-month-old Anna Shkaptsova was reported missing in the western Russian city of Bryansk on March 11, police and volunteers spent almost the next three weeks in a desperate search for her. But on Friday, investigators alleged that she had become just one more of the many children murdered every year by adults in Russia – in this case, by her father.

When nine-month-old Anna Shkaptsova was reported missing in the western Russian city of Bryansk on March 11, police and volunteers spent almost the next three weeks in a desperate search for her. But on Friday, investigators alleged that she had become just one more of the many children murdered every year by adults in Russia – in this case, by her father.

“During an argument, the child’s father, Alexander Kulagin, first hit his girlfriend and then their small daughter, throwing her from her stroller,” Russia’s Investigation Committee spokesman Vladimir Markin told journalists. “For at least the next 24 hours he refused to allow the mother to approach the child or call an ambulance. The girl died the next day.”

Markin also said that the girl’s 19-year-old mother, Svetlana Shkaptsova, had helped Kulagin, 31, attempt to cover up the crime. Police say she left the child’s empty stroller on the street while she went into a shop, after which Kulagin – dressed in women’s clothes, a wig and glasses to disguise his identity – took it and dumped it in the entranceway of a nearby building. Shkaptsova then called police to report the “disappearance” of her daughter, triggering a search involving some one thousand police officers and scores of volunteers. Police initially said they suspected internal migrants or gypsies.

But Shkaptsova confessed to the cover-up after four hours of questioning on Thursday, a regional prosecutor source told RIA Novosti. She also revealed that Kulagin had burnt the girl’s body and then buried in a different part of the city.

Unconfirmed media reports suggested the remains of the girl’s body were recovered on Friday and that Kulagin was not the girl’s biological father.

Although the case was just one of many in Russia – police on Friday said they were searching for a missing seven-year-old boy in the Urals city of Perm – the reported disappearance of Anna Shkaptsova made news headlines all across the country and state-run Channel One led with investigation footage of her mother’s tearful confession on Friday afternoon.

And the death also seemed set to usher in an unusual period of national soul-searching in a country where, as Russia’s ombudsman for children's rights, Pavel Astakhov, said on Friday, “over 1,000 children” are murdered every year – with the child’s parents guilty in a third of the killings.

“We have to pay attention to why some parents are so aggressive and heartless toward their own children,” head of the Public Chamber committee on citizen safety, Anatoly Kucherena, told RIA Novosti. “This is a question for the society in which we live…we need to dampen aggression, which has increased a lot of late.”

And Astakhov also said on Friday the government “urgently” needed to take steps to help vulnerable children and families.

“Thousands of families are in a dangerous position,” he wrote on his Twitter micro-blog.

He also criticized social services after it was revealed that Kulagin had been stripped of his parental rights in a previous relationship.

“In recent years we have seen a lot of cases where people have killed children simply because they cried or disturbed their sleep or drinking,” psychiatrist Sergei Enikolopov of the Moscow City Psychological and Pedagogical University said in an interview with Channel One.

“The media has been reporting recently on terrible crimes as if they are something ordinary,” he said at a downtown Moscow news conference. “And this played a not insignificant role in what happened in Bryansk – people start to think of such horrible things as somehow normal and everyday.”

Like most Russian provincial cities, living standards in Bryansk lag behind those in Moscow and St. Petersburg. And like almost everywhere in Russia, substance abuse is a real problem, with dozens of online advertisements offering to cure alcoholism and drug addiction.

“The socially vulnerable section of society has psychological problems,” veteran Russian criminal psychiatrist Mikhail Vinogradov told RIA Novosti. “In this case, we had a criminal father and a belligerent mother.”

And the head of UNICEF in Russia, Bertrand Bainvel, told RIA Novosti that social ills were a major factor in Russia’s depressing statistics on child abuse.

“The family is in crisis,” Bainvel said. “For a number of different reasons - from alcoholism and problems in the relationships between the parents, as well as stress and poverty.”

“But very often the system is not able to pick up and detect situations where there is a higher risk for children in families,” he said. “Right now it’s a very retroactive system.”

He welcomed however government campaigns to discourage child abuse. “The government is aware of the problem,” he said.

In Bryansk, Svetlana Shkaptsova looked set to be charged as an accomplice in her daughter’s murder.

“This was a silent acquiescence to a crime against her child,” leading Moscow lawyer Oksana Mikhalkina told RIA, adding that the tragedy would “reveal deep tendencies in our society, in particular unmotivated violence towards those who are weaker – children and the elderly.”