F1's Vitaly Petrov: 'You Have to Control Yourself' 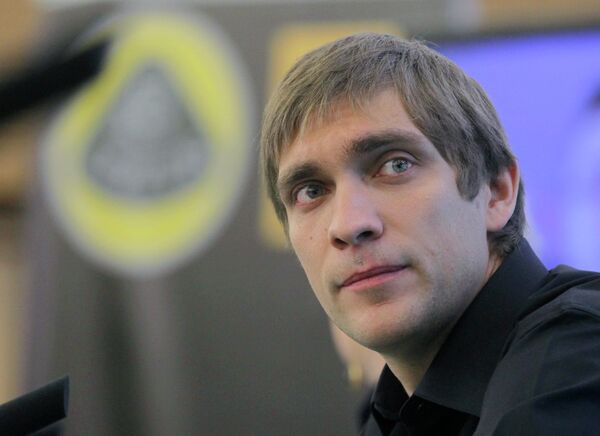 © RIA Novosti
Subscribe
Formula One driver Vitaly Petrov has put in two creditable performances since joining Caterham for 2012, but he’s a long way from the third place he won in Australia last year. He shared his thoughts with RIA Novosti on getting used to life at the back of the pack, Sebastian Vettel’s recent outburst and his rather-too-chatty Italian engineer.

Formula One driver Vitaly Petrov has put in two creditable performances since joining Caterham for 2012, but he’s a long way from the third place he won in Australia last year. He shared his thoughts with RIA Novosti on getting used to life at the back of the pack, Sebastian Vettel’s recent outburst and his rather-too-chatty Italian engineer.

RIA Novosti: What are your impressions after two races with your new team?

Petrov: “Everything’s fine, basically. The team is putting in maximum effort. In Malaysia we got the best result we can achieve at the moment. Unfortunately that’s it so far but there’s potential and the most important thing is ambition to improve the results. You need patience. At Caterham people are warm and respectful towards me. I have knowledge that can help them and already is helping. We rely on each other.”

Can we expect progress in the near future?

“It’s unlikely that we’ll fight for points this season, but we really hope to next season. But if the team does what they’re planning to do, by the end of the year we’ll be fighting more than just HRT and Marussia. In August, we’re moving to a big new headquarters.”

Have you got a good relationship with your new race engineer Gianluca Pisanello?

“We have a good relationship, but he has a small flaw – he chats far too much while I’m on track, as if we were chatting on the phone. Obviously that comes from his long work with [Jarno] Trulli, the Italian. It’s a bit distracting. I need clear guidance, especially because of the noise, and I don’t understand him very well. I’ve already asked him a couple of times: ‘Stop talking to me all the time.’”

Last season you were fighting for points and podium places. Now you’re at the tail end of the pack. Has it been hard to live with that?

“Of course it hasn’t been easy to live with that. No one wants to hang around at the back. I want to fight for points too, to get on the podium. After signing the contract I started to psychologically adjust to a situation where I’m fighting my teammate rather than other drivers. I’d taken that for granted. I’ll try to get the maximum result for my team. I don’t think that moving to Caterham is a step backwards. In terms of the number of points and podiums, maybe it is, but only that. For me personally, it’s a step forwards. New experiences, new knowledge.”

Last year you were frustrated when the car wasn’t the fastest or you were outside the top ten. Do you have those feelings now?

“I’ve set myself different goals, because I should do my job for the team. If I hadn’t done all that now, then I wouldn’t have been able to get such a good result in Malaysia. Of course, sometimes the feeling slips back in anyway: ‘Damn, what a shame. I want to fight.’ But I’m trying to contain the emotions within myself. I don’t need to think about that. It’s also not worth thinking about how you’re the first Russian driver in Formula One. Do that and your mind will go funny.”

You don’t even get those feelings when a Lotus laps you?

“When you’re racing you have a target and you don’t think about other stuff. I’ve been lapped before too. There’s nothing negative about it. I know that if I think about how someone’s lapping me, it’s not important who, I’ll get wound up and fly off the track. Why do I need that?”

“Karthikeyan didn’t do anything unnecessary, didn’t hit him, didn’t change direction sharply. Sebastian overtook him and started to turn. But Narain was going straight. Vettel shouldn’t have said anything like that or showed him the finger. I understand that it’s the emotions, the race. You can understand situations like that, but you have to control yourself. Or at least try to. I think that the team will teach him a lesson for using words like that.”

Karthikeyan said that some leading drivers are impolite when they lap people.

“I’ve never noticed anything of the sort. In Malaysia, Charles Pic just didn’t let me through for a whole lap when he was a lap down. I was obviously angry at him but I understood unnecessary moves could have disastrous consequences.”

Were you surprised by Perez’s second place in Malaysia?

“I think that this season most of the cars aren’t that far apart in terms of speed. Both Ferrari and Sauber picked the best strategy, did good pit-stops, which allowed them to take the top spots. And Sauber’s speed really makes an impression! I think that Fernando Alonso only managed to win because of his experience. If Sergio hadn’t made those mistakes, he’d have had the chance to win. I expect we’ll see more than one more surprise this season. There will be a lot of them!’

Do you like your new teammate Heikki Kovalainen's helmet?

“It's cool. Especially the first time we saw each other, we laughed a lot. Straight away, I offered him two helmets with different Angry Birds, one’s angry, that’s for unsuccessful races, and the other’s happy, if you’ve had a good race.”

Is your main goal this season to beat Kovalainen?

“It’s one of them. I also have to work on myself, work more closely with the team, try to learn something new about the car’s setup.”

Did your relationship with F1 change in the off-season when you didn’t have a contract?

“I don’t think it changed much. But I learned a lot of different lessons, that’s for sure. Of course, on the one hand, it’s a shame that it didn’t work out for me to stay at my old team. The disappointing thing was that we didn’t plan to look for a new team, and there wasn’t much time. But that’s life. I’m sure that everything that’s happening is for the better.”