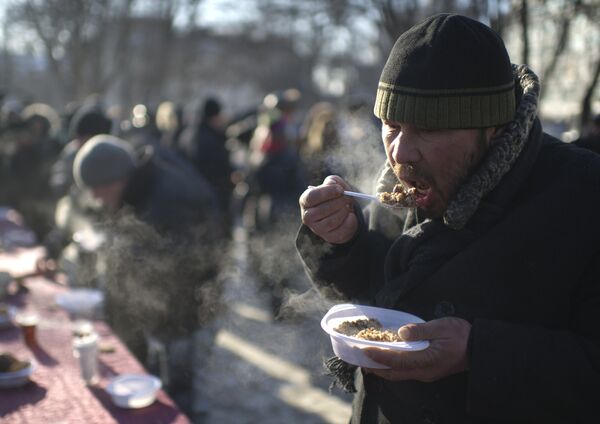 “We shouldn’t just wait for a call for help, we should go to the people ourselves,” Andrei Mudritsky, who supervises street aid for homeless people at City Hall, said at a conference organized by SamusocialMoskva charity, which took place at the French Embassy in Moscow.

There are an estimated 10,000 to 12,000 homeless in Moscow, which has a population of 11.5 million, said Mudritsky’s supervisor Andrei Pentyukhov. Several private charities provide aid for them on the ground but the only city-backed effort is the Social Patrol, launched in 2009, which is still considered a pilot project.

The Social Patrol currently runs a fleet of 10 mobile units that take to the streets in round-the-clock shifts, but by 2017, it hopes to increase its number of vans to 50, Mudritsky said.

The patrol offers urgent medical help, clothing, warm food and advice on rehabilitation to those living in the streets and it also enlists the help of some 400 volunteers for foot patrols.

Since 2009, the service has gained enough experience and recognition with the homeless, who are known for their reluctance to talk to officials, so that they voluntarily flocking to the vans when they stop by train stations, heating lines and other places favored by the those down-on-their-luck, the official said.

The service will also get a three-digit telephone number, to be used by either the homeless themselves or Muscovites looking to report a street person in need of help, Mudritsky told RIA Novosti on the sidelines of the conference. He did not give out the number.

Most people in the streets currently falling into age bracket between 30 and 50, Pentyukhov said.

The number of underage homeless in Moscow has plummeted in recent years, said Anastasia Luneva of SamusocialMoskva.

The change prompted SamusocialMoskva to fold its own street patrol project, which focused on the young homeless, and switch to educating operatives for the Social Patrol, she said.

The issue of homelessness and social exclusion is global and ties in with urbanization, which is accelerating worldwide, Xavier Emmanuelli, a co-founder of Doctors Without Borders charity, said at the conference.

“This epidemic has been rampant since the 1970s,” said Emmanuelli, who also established the French organization SamuSocial in 1993. The organization operates in several French cities with financial backing of France’s government, but also has an international arm and, since 2006, an office in Moscow.