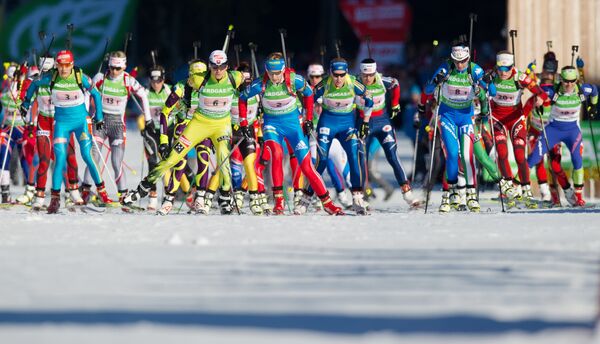 Russia’s national biathlon coaches did an “unsatisfactory” job in the 2011-12 season, a council of coaches assembled by the Russian Biathlon Union ruled Wednesday.

Russia’s national biathlon coaches did an “unsatisfactory” job in the 2011-12 season, a council of coaches assembled by the Russian Biathlon Union ruled Wednesday.

Russia won the men’s and women’s World Cup team competitions, but picked up just two bronze medals at the world championships in Germany last month in its worst-ever showing.

The assembly of 40 Russian coaches rated the national team coaching “unsatisfactory” after deciding that the season deserved to be judged on the world championship alone.

The performance in Germany was unacceptably poor, the Russian Sports Ministry’s representative in the federation said.

“The team’s appearance at the major competition didn’t satisfy anyone,” he said on the federation’s website.

“Both the men’s and women’s teams were unsuccessful. A lot of people noticed real progress with the men’s half. There are more questions about the women.”

Performing at the major competitions was even more crucial because Russia will host the 2014 Winter Olympics, he said.

“The Olympic Games will only happen once in any case, and the coaching staff has to understand that and get used to it.”

A number of Russian commentators have called for the national team coaches to be replaced, with particular ire reserved for German coach Wolfgang Pichler, who trains the women’s team.

However, double Olympic champion Olga Medvedtseva said earlier this month that the coaches needed more time to complete a long-term plan for success at the Olympics.

“You need to give the coaches time, freedom and the ability to realize their plans. It’s time to stop all this messing about with changing the coaching staff,” she said in a blog post on the federation’s website.

Meanwhile, Mikhail Prokhorov, the billionaire politician who heads the Russian Biathlon Union, has said he takes full personal responsibility for the team’s failures in the past season.