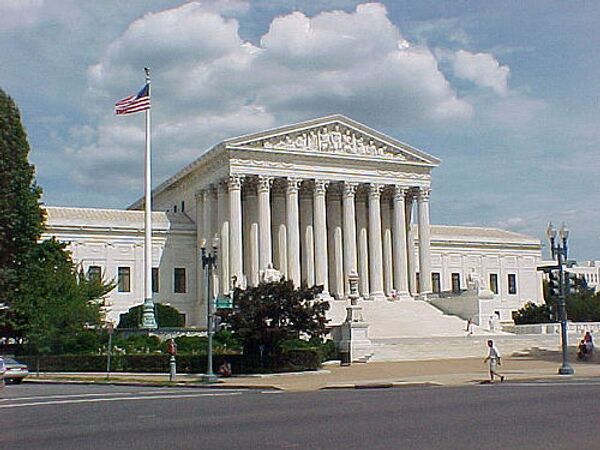 It was the second day of the three-day discussions on the provision, which is at the core of President Barack Obama’s healthcare reform. The legal challenge has been brought by 26 U.S. states and the National Federation of Independent Business, who say that the proposal violates the constitution, including principles of freedom and liberty.

Tuesday’s discussions focused on whether the law falls under the clause of the Constitution allowing regulation of interstate commerce or possibly some other provisions.

At least 17 members of Congress attended the hearings, along with several members of the Obama administration, including Attorney General Eric Holder, CNN reported.

The court has four liberal justices, who are likely to support the move: Stephen Breyer, Ruth Bader Ginsburg, Sonia Sotomayor and Elena Kagan. Four Republican-appointed judges – Chief Justice John Roberts and Justices Antonin Scalia, Samuel Alito and Anthony Kennedy – are likely to vote for it to be struck down.

The Supreme Court’s final ruling may, in fact, depend on Justice Anthony Kennedy, who has been a swing vote in cases when the judges are divided according to their ideological views. Kennedy indicated on Tuesday that he was more inclined towards the stance of Republican-appointed judges.

The decision is expected in June, when the campaign for November's presidential and congressional elections will be in full swing. A total of 47% of voters disapprove of the healthcare law and 36% are in favor, a survey published on Monday shows.

The Patient Protection and Affordable Care Act, passed in March 2010 and labeled “Obamacare” by its opponents, will become the most significant overhaul of the U.S. healthcare system in about 40 years if adopted. It is to take effect in 2014.

It is designed to reduce the cost of health insurance by bringing some 32 million Americans into the healthcare insurance system. The law also prohibits insurance companies from denying insurance to people who have pre-existing conditions and limits the charge for older people.

The discussions will go ahead on Wednesday to determine whether the law must be declared unconstitutional in full if the court rules that the disputed individual mandate is.