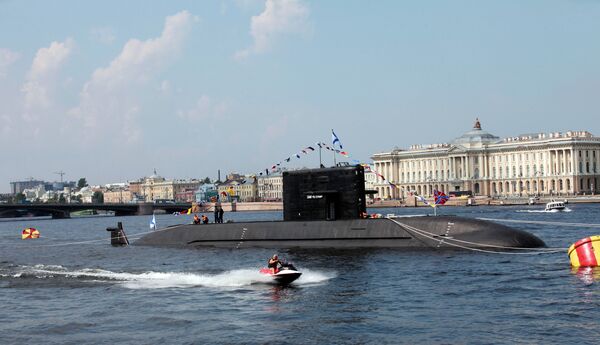 The Amur 1650 is one of several contenders, including the Scorpene (France), Type 214 (Germany) and S-80 (Spain) in a tender for the Indian Navy for six subamrines with a total value of $11.8 billion.

"Russia is currently completing tests of a new air-indepedent propulsion system, which could be installed not only on the Amur 1650 but on jointly developed boats," Komardin said. "This is a critical factor for the Indians. So our chances here are good," he added.

Rosoboronexport, Russia's defense sales holding, has already offered India its Amur 1650 boat, which started trials with the Russian navy in 2010. The Amur has an armament of multirole torpedos and Klub anti-ship missiles, and can also strike land-targets with advanced cruise missiles, which may include the India-Russian Brahmos. "These missiles which the Indians want can only be supplied by Russia," Komardin said.

The Amur 1650 has a good chance of winning the tender, Komardin claimed, thanks to its ability to remain submerged for over 25 days using its air-independent propulsion, and also its long-range weaponry. Similar foreign boats can only stay submerged for 15-20 days.

Russia is currently evaluating the Lada class air-independent submarine, a derivative of the Amur 1650. In 2010 the Lada class submarine St Petersburg entered service with the Russian Fleet.

The Russian Fleet Commander Admiral Vladimir Vysotsky told RIA Novosti previously that the first Russian air-independent boat, based on a similar design, the Projet 677 class, could enter service in 2014. Two such hulls are currently under construction at the Admiralteiskie Verfi shipyard in St Petersburg, which could be fitted with a closed-cycle propulsion system.

An air-independent propulsion system is currently being rapidly developed by specialists from the Rubin submarine design bureau.

Air-independent submarines, usually using hydrogen-orygen fuel cells, are quieter than conventional diesel-electric boats, and do not have to surface or use snorkel tubes to breathe air, which makes them vulnerable to detection by radar and other sensors.