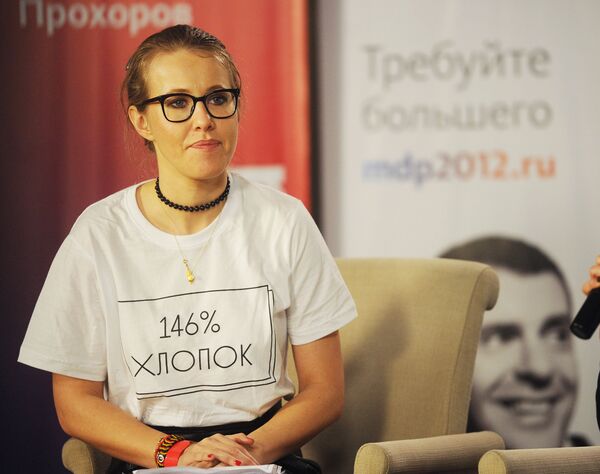 Ksenia Sobchak, it-girl and longtime acquaintance of president-elect Vladimir Putin, has been called for questioning over an alleged attack on pro-Putin journalists, Moscow police said on Monday.

Ksenia Sobchak, it-girl and longtime acquaintance of president-elect Vladimir Putin, has been called for questioning over an alleged attack on pro-Putin journalists, Moscow police said on Monday.

Sobchak, who was a speaker at this winter’s anti-Putin rallies, faces up to two years in prison if charged and convicted of destroying a video camera belonging to a film crew of the online tabloid Lifenews.ru.

The incident took place in the bohemian Tverbul pub in downtown Moscow on March 13, where two female Lifenews.ru journalists spotted and started to film Sobchak in the company of opposition activist Ilya Yashin.

The journalists say Sobchak and Yashin destroyed the company-owned camera, worth 100,000 rubles ($3,400), to get rid of the footage. The activists say the reporters simply erased the footage after being requested to do so by Tverbul security guards, who were asked to intervene to protect the privacy of those being filmed.

Yashin and the Lifenews.ru journalists have also been called for questioning, police said, although it remains unclear when this may take place or if any of them intend to attend. Sobchak said on her Twitter account that she will sue the journalists over false accusations.

Lifenews.ru, whose editor-in-chief Ashot Gabrelyanov is an ardent supporter of Putin’s, leaked audio recordings of private conversations by opposition activists during the mass opposition protests in Moscow this winter. Those involved said the tabloid's actions violated their privacy. A case was opened but no progress has been reported since December.

Sobchak, 30, a socialite and reality show host, is the daughter of late St. Petersburg Mayor Anatoly Sobchak, under whom Putin worked in the 1990s.