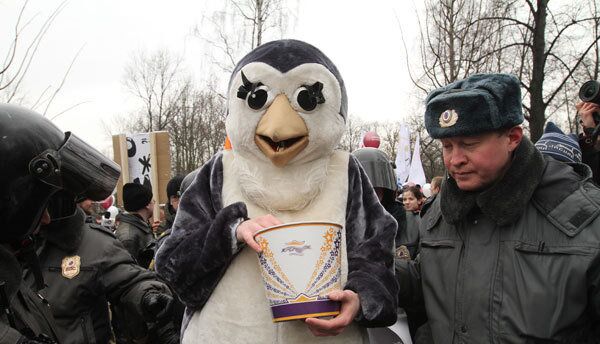 © Photo : fontanka.ru
Subscribe
International
India
Africa
Police in St.Petersburg detained a man dressed up in a penguin costume at the sanctioned opposition rally on Saturday

Police in St.Petersburg detained a man dressed up in a penguin costume at the sanctioned opposition rally on Saturday, St.Petersburg news portal Fontanka.ru reported.

Almost 1,000 people took part in Saturday's sanctioned rally For Fair Elections in St.Petersburg. Police however detained a group of four people, who the organizers said were suspected to be ‘provocators’ from the Kremlin youth movement, Nashi (Ours).

According to the Fontanka.ru, a group of four, including the man wearing penguin costume, was standing near the Gorkovskaya metro station, a meeting point for the participants of the rally. They were holding a banner: “Hamsters? Penguins? Who are we?” referring to the popular mocker of the opposition activists, “hamsters.”

When they refused to leave, police detained the suspected provocators, the news portal said.

There were no other incidents at the rally, police said.

The participants, protesting against allegedly rigged parliamentary and presidential elections, marched through the Alexandrovsky Square, passed the Kamennoostrovsky Avenue and held a gathering at the Field of Mars Square.