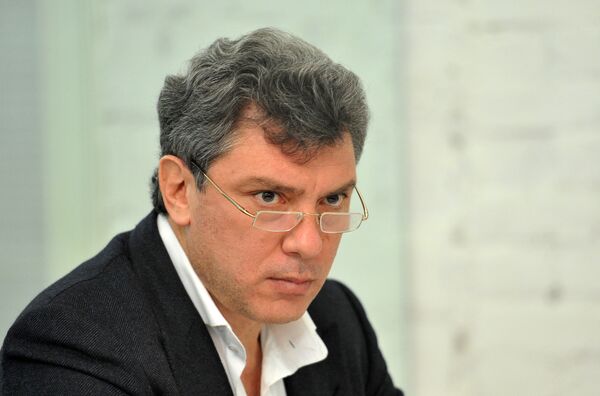 A Russian opposition leader Boris Nemtsov said he was expecting several famous inmates to be pardoned by May 7, the president-elect Vladimir Putin’s inauguration day, RIA Novosti reported on Saturday.

“There's a high likelihood that a number of jailed famous people will be released on May 7,” Nemtsov said at the authorized rally on Saturday in downtown Moscow, adding that the first pardons are likely to come in April.

Nemtsov however did not elaborate what made him voice those suggestions. “I don’t want to add anything,” he said.

Russian opposition activists made release of the ‘political prisoners’ one of their main demands at the mass anti-government rallies that spread across Russia after the December’s parliamentary elections that were allegedly slanted in favor of the ruling United Russia party.

In early February a journalist Olga Romanova and the State Duma member Gennady Gudkov, submitted to the presidential administration a list of 39 inmates whom they described as “political prisoners.”

Among the names on Romanova’s list are Yukos head Mikhail Khodorkovsky and his partner Platon Lebedev, jailed on fraud charges, Other Russia activist Taisiya Osipova, convicted on drugs charges, and Interior Ministry officer Sergei Arakcheyev, sentenced for killing three civilians during the military conflict in Chechnya in 2003.

The next day after the March 4 presidential elections that brought Putin to landslide victory and raised new speculations about mass vote-rigging and multiple voting schemes, Russian outgoing president Dmitry Medvedev ordered a probe into the legality of the verdict to Khodorkovsky.

Khodorkovsky has been in jail on charges of fraud and tax evasion since his arrest on a Siberian airport runway in 2003, which his supporters claim was punishment for funding the liberal opposition at a time when Putin was beginning to create a “power vertical.”