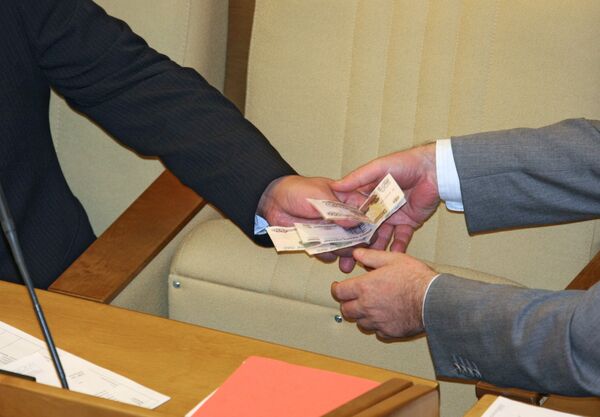 A Russian Christian group has undertaken to track down corrupt state officials it says are guilty for the "suffering" of millions of people across the country.

A Russian Christian group has undertaken to track down corrupt state officials it says are guilty for the "suffering" of millions of people across the country.

"Thousands of officials across the country keep on stealing," the unregistered Russian Christian Social Political Union said in a posting on its LiveJournal blog on Thursday, unveiling a website called NeKradi.ru. "Regions, towns and villages are suffering."

The site's name, Ne Kradi (Thou Shalt Not Steal), comes from one of the Ten Commandments.

The union was founded in fall last year and styles itself as Russia's only political group to bring together Orthodox Christians, Catholics and Protestants.

There is so far only one entry on its website, which exposes alleged fraud by a local official during a gasification dispute in a village in the western region of Lipetsk.

A handful of other cases are on the way, the group's spokesperson told RIA Novosti.

"Christians are not grannies wearing handkerchiefs, they are not Vsevolod Chaplin or Pussy Riot," spokesperson Margarita Olar said, referring to the head of the Orthodox Church's social affairs department and the feminist punk group, which is known for its controversial public protests.

Three Pussy Riot members were detained and could face up to seven years in jail on hooliganism charges after an impromptu performance at the altar at the Cathedral of Christ the Savior in downtown Moscow on February 21.

"Christians have certain political principles. We have lawyers and influential friends," Olar went on. "However, we are not interested in the public flogging of corrupt officials."

The group, however, denied being inspired by anti-graft campaigner and opposition figurehead Alexei Navalny, who set up a website in 2009 to monitor suspicious state tenders.

Russia is ranked 143rd out of 182 states in the Transparency International's 2011 Corruption Perceptions Index.