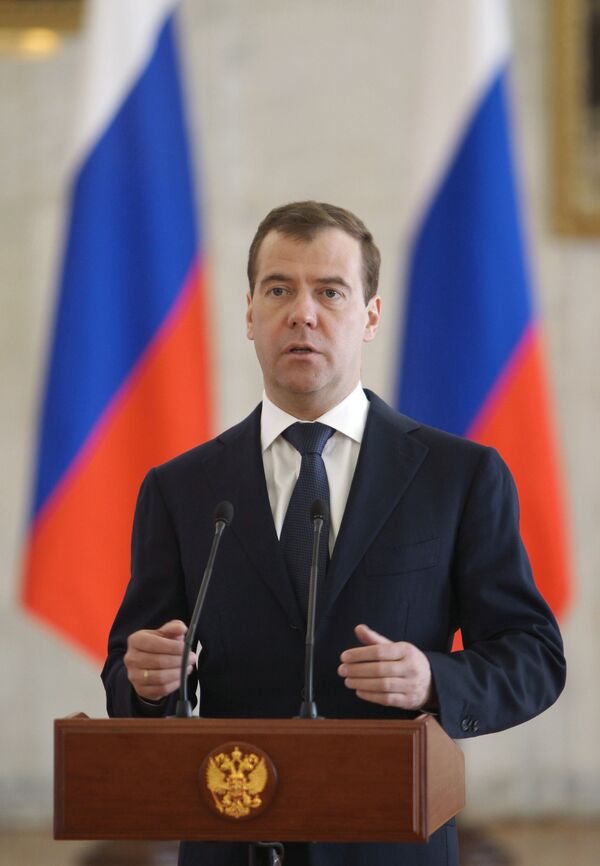 Russia is still open for dialogue on a planned U.S. missile shield in Europe, but opportunities for discussion are decreasing as the system moves closer to becoming a reality, President Dmitry Medvedev warned on Friday.

Russia is still open for dialogue on a planned U.S. missile shield in Europe, but opportunities for discussion are decreasing as the system moves closer to becoming a reality, President Dmitry Medvedev warned on Friday.

“The door is not closed for talks on missile defense,” Medvedev said at a Euro-Atlantic security forum in Moscow. “We still have time, but it is running out.”

Negotiations between Russia and NATO member states on the U.S.-led missile defense project have deadlocked over the West's reluctance to give Moscow legally–binding guarantees that the shield will not be used against it.

The United States says the shield is designed to protect against “rogue states” such as Iran and North Korea, but Russia is concerned it could eventually be used to neutralize its own nuclear deterrent.

And on Friday, Medvedev said the missile shield issue was a “test” for future Russia-NATO cooperation. He also gave voice to growing Kremlin exasperation over a lack of progress in talks on the shield.

"Why should we believe that this new European missile defense is not targeted against us?" Medvedev said. "They keep telling us 'this system is for you', but how should we use it?"

Medvedev, who steps down in early May after four years in the Kremlin, also warned that Russia could be "forced to respond" to the potential threat. His successor, Vladimir Putin, is expected to meet U.S. President Barack Obama on the sidelines of a Chicago G8 summit in mid-May.

Medvedev’s comments come just days after his announcement that Russia was preparing a host of countermeasures to tackle NATO missile defense, including forward deployments of tactical nuclear missiles in its Baltic enclave of Kaliningrad.

Under President George W. Bush, Washington planned to deploy major parts of the shield in Poland and the Czech Republic. But these plans were scaled down after Obama’s arrival in the White House. They now involve a proposed system of interceptors based on land and at sea around Europe. The United States has also said it wants Russia to become part of the system.

Hopes of a breakthrough in talks were raised after reports suggested the United States could supply Russia with technical details of the SM-3 interceptor rocket that NATO plans to install at the heart of its system.

But a high-ranking U.S. Department of State official told RIA Novosti on Thursday that “no classified missile defense information was provided to Russia.” A report by Russia’s Kommersant newspaper said information had been handed over, but that Russian military specialists had described it as “useless.”

“The time for this has come and would be of mutual benefit and in our common interests,” Medvedev said.

And he also hit out at what he said were popular conceptions that non-NATO states were “international losers.”

“Those who do not participate in NATO are often seen as either hidden enemies or international losers. This is bad,” Medvedev said.

Medvedev also used Friday’s speech to hit out at the West over what he said was its willingness to “use arms…to impose its own opinions on those who do not agree.”

“We have seen recently another increase in those wishing to use arms as a means of solving problems,” he said. “This is extremely dangerous and an unacceptable tendency.”

He also accused the West of “lame logic and the psychology of war” in its “rush to make a modern, democratic country out of Syria and tackle Iran’s nuclear program.”

Medvedev also urged the closing of “loopholes” that allowed the use of military force without UN approval.

“We regularly hear ‘We cannot reach agreement with the UN…so we will act ourselves in the name of a better world, or democracy,” he said. “We need to close any loophole that allows actions that go around the authority of the UN Security Council.”

Russia has vetoed UN resolutions on Syria over what it called bias in favor of rebel forces seeking to overthrow Syrian President Bashar al-Assad.

But earlier this week, in an apparent toughening of its stance, Russia backed a peace plan for Syria forwarded by UN envoy Kofi Annan. Foreign Minister Sergei Lavrov also said Assad had "responded incorrectly" to initial peaceful protests against his rule.