Russia to Return to Saving Oil Revenues in Funds 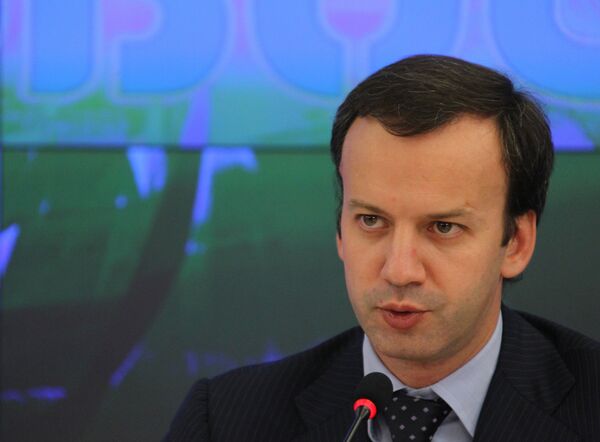 "In fact, we have returned to pre-crisis principles concerning budgetary discipline ... Formally the budget rule is cancelled, but the president and the prime minister have made a decision in principle that we must return to the budget rule," Dvorkovich told a news conference.

"[The rule] is being worked out now and will be approved soon," he added.

The Russian government used oil revenues stored in the stability funds to cover the budget deficit and fund anti-crisis measures after 2008.

The government expects the Reserve Fund will increase to 5.4 percent of the country's GDP by 2015, while the National Welfare Fund will grow to 3.9 percent of GDP in the same period.

Russia’s financial stability will not be threatened by implementation of president-elect Vladimir Putin’s social economic initiatives, voiced during his election campaign, Dvorkovich said.

“As for the implementation of these initiatives, we will be acting in line with our budget restrictions and financial stability will not be undermined,” Dvorkovich said.

On Thursday, Putin, currently Russian prime minister, ordered the government to work out a road map and ensure necessary funding to fulfil his electoral promises.

Core social initiatives stated by Putin in his pre-election program include support of families with many children, an increase in stipends for students to living-wage level and higher wages for professors in universities. Earlier in the month, he said that the estimated cost of implementing his pre-election social promises will stand at 1.5 percent of Russia's gross domestic product.

“The figure of 1.5 percent is an average one and it fits with resources that we are expecting in the coming years and we see no serious problems in view of the budget deficit and debt,” Dvorkovich said.

The presidential aide also said that the Russian state debt “is unlikely to exceed 20 percent of GDP in the near future, and rating agencies have no grounds to worry.”

Fitch ratings agency has estimated Putin's pledges to cost about $160 billion over six years, while state-owned Sberbank put the figure even higher at 5.1 trillion rubles, or $173 billion.