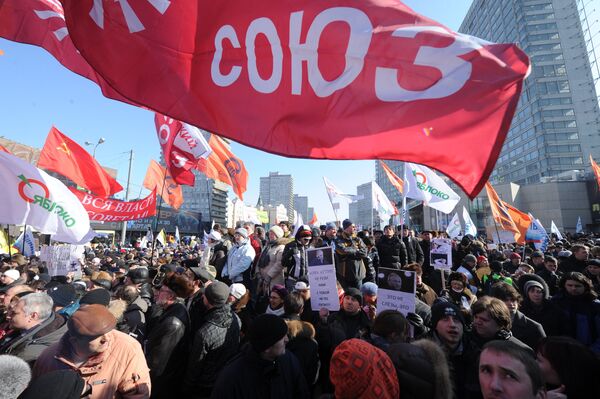 Nationwide opposition rallies spread across Russia in early December, following the allegedly rigged parliamentary elections in which the ruling United Russia party headed by the Russian Prime Minister Vladimir Putin, secured a bare majority of seats in the State Duma.

The new protests are directed mainly against Putin, after his victory in March 4 presidential elections. Opposition activists have accused the authorities of ballot stuffing, multiple voting schemes and other violations. However, the number of participants at the rallies has declined significantly compared to those in December.

“The demonstration organizers have written on their banners: For Fair Elections, and the authorities have responded by installing web cameras at polling stations and bringing in observers,” the head of the VTsIOM pollster, Valery Fyodorov, told Kommersant.

He predicted the demonstrations would shrink since Putin’s victory, unlike United Russia's narrow poll win, was never in doubt.

The protests have become a routine, Fyodorov told Kommersant.

The poll, conducted on March 17-18, also revealed that 32 percent of the respondents were indifferent about the rallies, 19 percent were angry with the numerous street gatherings, another 18 percent worried about the consequences of the protests, which recall the rallies of two decades ago that preceded the Soviet Union’s collapse.

Nine percent of the surveyed people approved the opposition rallies and three percent have become more optimistic about the future, according to the survey. Eight percent were undecided.

Members of the opposition, headed by activists Sergei Udaltsov and Boris Nemtsov, announced last week a "March of Millions" protest scheduled for May 6, the day before the inauguration of president-elect Vladimir Putin.