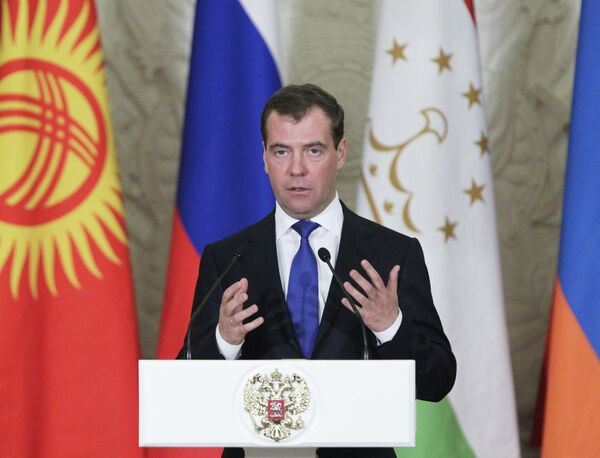 The countries that have observer status in the Russian-led Eurasian Economic Community (Eurasec) would benefit from joining the Customs Union, Russian President Dmitry Medvedev said on Monday.

“We have said that we are forming the Customs Union and spoke about the advantages (of membership), and of certain disadvantages that may emerge and are already emerging for states that are not members of the Customs Union,” Medvedev said after a meeting of the Eurasec Interstate Council in Moscow on Tuesday.

The meeting was attended by the presidents of Eurasec members Russia, Belarus, Kazakhstan, Kyrgyzstan and Tajikistan, as well as the leaders of Eurasec observer states Armenia, Moldova and Ukraine.

Kiev has so far declined to join the Customs Union, but said that it is willing to cooperate on a '3+1' basis - an option that has been rejected by Moscow.

The Russian president also said that the final agreement on formation of the Eurasian Economic Union could be signed on January 1, 2015, while the next meeting of the Interstate Council of Eurasec could take place in May this year.