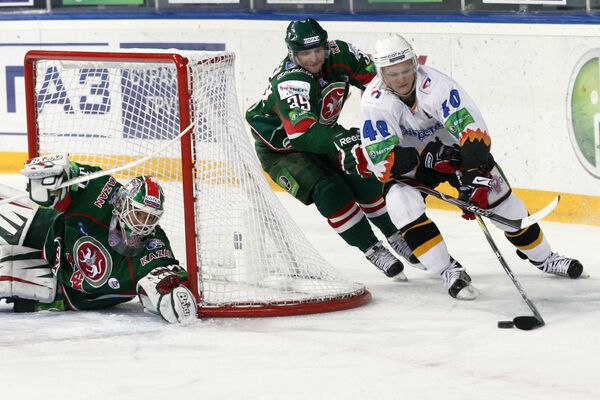 The result means that the 2009 and 2010 Gagarin Cup winner has cut its playoff series deficit to 2-1 against the regular season champion.

Avangard Omsk took a 2-1 series lead against Metallurg Magnitogorsk with a 3-1 comeback away win in Sunday’s other Eastern Conference semifinal game.

Ak Bars dominated in the first period, recording ten shots to Traktor’s five, but could not convert their chances, before a string of disciplinary problems for the hosts played into Traktor’s hands in the second period.

Evgeny Skachkov struck back for the Ak Bars little more than a minute later, finishing from a tight angle from Konstantin Korneev’s assist.

Within a 30 second spell towards the end of the second period, two Ak Bars players earned major penalties, Aleksey Tereshchenko for checking a player without the puck, and Denis Kulash for a check from behind on Jan Bulis that left the ex-Montreal Canadiens center concussed, Traktor coach Alexander Shunin said after the match.

Ak Bars survived a Traktor onslaught despite their two-man disadvantage, and threatened Traktor’s goal after returning to full strength, but could not find a breakthrough.

Kapanen struck in the second minute of overtime, picking Denis Zarilov’s pass to beat Michael Garnett in the Traktor goal with a fierce shot.

Defeat would have left Ak Bars with little chance of reaching the Eastern Conference final, and this spurred the hosts on, coach Vladimir Krikunov said.

“There was nowhere to retreat. The game tested our nerves. Everyone was completely committed,” he said.

Surviving five minutes with three players after the major penalties gave Ak Bars the confidence to win, he added.

“Playing for five minutes as a three was a real stimulus for the guys. They rallied and united.”

In Magnitogorsk, Nikita Pivatskin was the hero for Avangard, latching onto Roman Cervenka’s pass to level the scores at 1-1 and cancel out Dmitry Obukhov’s goal for the hosts midway through the first period.

Pivatskin struck the winner early in the second period, finishing from Alexander Frolov’s assist. Anton Kuryanov extended Avangard’s lead with three minutes of the game remaining to secure the win.

Avangard coach Raimo Summanen said that goaltender Karri Ramo, who conceded once from 29 shots, had been the deciding factor in the game.

“A very complicated and difficult game. Our team played well. Karri Ramo also had a very good game,” he said on the Metallurg website.