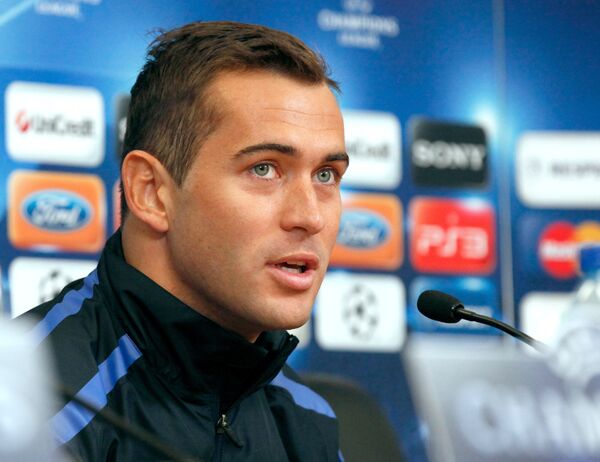 Zenit St. Petersburg ran riot against title rivals Dynamo Moscow in a 5-1 win on Friday to stretch their lead at the top of the Russian Premier League table to nine points.

Zenit St. Petersburg ran riot against title rivals Dynamo Moscow in a 5-1 win on Friday to stretch their lead at the top of the Russian Premier League table to nine points.

Dynamo suffered their heaviest defeat of the season, and are now 11 points off the lead in third.

Kevin Kuranyi grabbed the hosts' only goal with a 72nd-minute header.

Second-placed CSKA Moscow can pull back to within six points if they beat Spartak Moscow on Monday.

"The quality of the performance and the result always go hand-in-hand, so they were of equal importance," Zenit coach Luciano Spalletti said of his team's biggest win since a 5-0 defeat of FC Krasnodar in August. "Today we saw a really good team performance, and we need to keep working because we have a lot of matches ahead."

"Such losses are a real psychological blow, but we are an experienced side and we'll prepare for the next game as we should."

Zenit were three up inside 24 minutes as Dynamo struggled to keep the visitors in check.

On 12 minutes, defender Domenico Criscito headed in from close range when Kuranyi failed to clear a corner from Andrei Arshavin, who had one of his most effective games for some time.

Zenit doubled their lead spectacularly right after the restart when Kerzhakov fired in a 25-yard drive into the top left corner. Dynamo midfielder Artur Yusupov had given away possession cheaply to allow Zenit in.

Arshavin on 24 minutes picked up Criscito’s pass on the left touchline and cut inside, drawing in defenders Vladimir Granat and Sebastian Fernandes to create space for Sergey Semak, who picked up Arshavin’s weighted pass and calmly made it three with a low shot.

Dynamo pulled back into contention on 72 minutes when Kuranyi headed in from Dzsudzsak’s free kick, but two late strikes put paid to any hopes of a comeback.

Kerzhakov scored his 20th goal of the season with a diving header from Huszti’s left-wing cross, before the Hungarian, playing for the first time since September due to injury, struck with a powerful free-kick that deflected off the Dynamo wall and into the net.

The hosts went close through Andrei Voronin, who just failed to reach a cross from winger Balasz Dzsudzsak and forced Vyachelsav Malafeev into a fingertip save from Kuranyi's cross.

Zenit could have added to Dynamo's misery through Nicolas Lombaerts, who headed wide from a corner seconds into the second half, and Arshavin, who cut in from the right before firing a low drive at Roman Berezovsky from 20 yards.

The other two league meetings between the teams this season ended in draws, 1-1 in June and 0-0 in October.