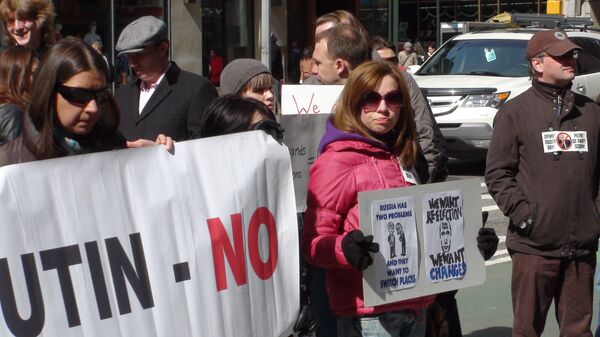 Pavel Khodorkovsky, the eldest son of the jailed Russian tycoon Mikhail Khodorkovsky, was one of the main speakers at a rally in New York in support of the Russian opposition.

Pavel Khodorkovsky, the eldest son of the jailed Russian tycoon Mikhail Khodorkovsky, was one of the main speakers at a rally in New York in support of the Russian opposition.

The rally in New York was timed to coincide with opposition protests in Russia on Saturday.

“We are certainly disappointed that the percentage of votes in support of Vladimir Putin [in Russia] is still very high,” Pavel Khodorkovsky said in an interview with RIA Novosti after the event.

He said he believed that the recent wave of protests in Russia was not in vain as it forced the authorities to meet some of the opposition demands, including the decision to order a probe into the legality of the verdict to his father and to simplify procedures for registering political parties.

He stressed, though, that the “street pressure” on authorities should not lead to violence, public disorder or provocations.

Pavel Khodorkovsky, 26, has been residing in the United States in self-imposed exile since 2003. He works in a media company in New York, and has a wife and a one-year-old daughter.

He is also the president of the Institute of Modern Russia, which seeks to promote the development of civil society in Russia by reinforcing the rule of law and strengthening relationships between Russia and other countries.

Khodorkovsky says he has been unable to return to Russia for fear of political persecution and actions against him aimed at pressuring his father to abandon his legal battle.