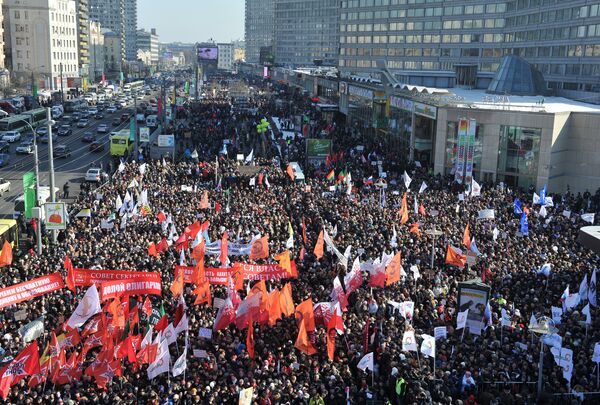 Thousands of people critical of the political system led by Prime Minister Vladimir Putin rallied peacefully on Saturday in central Moscow, asserting that the Russian leader’s recent victory in presidential elections was not fair and demanding reform.

Thousands of people critical of the political system led by Prime Minister Vladimir Putin rallied peacefully on Saturday in central Moscow, asserting that the Russian leader’s recent victory in presidential elections was not fair and demanding reform.

Police said around 10,000 people turned out – organizers put the number at 25,000 – for the authorized protest along a central Moscow avenue and participants vowed to press ahead in the future with their demonstrations whether they received permission or not.

The size of the crowd however was far smaller than the mass opposition demonstrations that shook Russia earlier this winter, the mood of participants was more subdued and key protest leaders like blogger Alexei Navalny stood quietly in the crowd and did not address the rally.

“I’m not sure what’s going to happen with the protest movement,” said Anton Yezhov, a middle-aged lawyer who works in a law office nearby the protest site. “I don’t rule out that Russia will return to totalitarianism. But it’s my civic duty to come out and show that I don’t agree with the way the elections were stolen,” Yezhov said.

Putin, 59, won the March 4 presidential election with 63.6 percent of the vote, according to the Central Election Commission, ensuring his return to the Kremlin after a four-year hiatus during which he has occupied the post of prime minister.

Putin’s opponents and some international observers said the vote was biased in Putin’s favor and claim his support was probably much lower. Putin himself acknowledged violations but said these were not of sufficient magnitude to have altered the official results significantly.

No one however has disputed that Putin won the majority of votes and on Friday US President Barack Obama telephoned Putin and formally congratulated him on his election victory, officials in Washington and Moscow said.
Russian opposition activists however shrugged off the US recognition of Putin’s return to the Kremlin, insisting that Washington’s stance in no way altered their position that Russia is in serious need of political reform.

“The main thing for us is that people are coming out onto the streets to show their opposition to Putin and we know that the only people who can change anything in our country are we ourselves,” he said, adding: “We don’t need Obama.”

Though the crowd at the demonstration was calm, police presence in the area and elsewhere in the Russian capital was heavy and a police helicopter hovered overhead as the rally unfolded.

Some demonstrators said they felt let down by the event. “I’m disappointed by the low turnout,” said Yury Rostovsky, a pensioner from Moscow. "Nothing will change in Russia for the better until we get at least half a million people on the street.”

Opposition leaders however said they were pleased by the turnout at the demonstration, held on a long holiday weekend when many Moscow residents leave the city, and vowed to hold more gathering ahead of Putin’s inauguration scheduled for May 7.

“We need to get a million people to turn out on the street before the inauguration,” liberal opposition activist Sergei Udaltsov told the crowd through loudspeakers from a stage erected alongside the avenue where the demonstration was held.

Udaltsov admitted the turnout at Saturday’s protest was much lower than at previous opposition rallies. He said this was because “the entire Kremlin propaganda machine has been working full time to convince people that what we saw were elections.”

The participants at Saturday’s rally were a mix of liberal opposition activists, nationalists, communists and pensioners, united only by their anger at Russia’s current political reality.

One protest participant was dressed as Robocop, the Hollywood science-fiction movie figure, and carried a sign reading: “Robocop Against The Robocops.”

Ryzhkov also said the opposition would continue to press its demands.

“We will continue to demand freedom of speech, snap parliamentary elections and a new presidential vote after the introduction of the new rules. We also demand the end of censorship of the media and release of political prisoners,” he said.

A series of mass rallies have been held in Moscow since December, when Putin’s United Russia Party won in parliamentary elections marred by allegations of electoral fraud across the country.

Five massive opposition events between December and March each attracted tens of thousands of demonstrators. Putin’s supporters have also held rallies attracting tens of thousands of people, most recently in a huge Moscow sports stadium a week ahead of the presidential election.

Around 250 people were detained on Pushkin Square after an anti-Putin protest earlier this month when they failed to obey police orders to disperse after the allotted time for the demonstration had expired.

On Saturday, Udaltsov attempted to lead some 60 activists in an unsanctioned march on the Kremlin from the Novy Arbat, but police stopped them, briefly detaining Udaltsov and two others.

Moscow police also reported detaining 25 nationalists who attempted to stage an unspecified “provocation” by the central Kievsky train station, around a kilometer from Novy Arbat.

Meanwhile in St. Petersburg, where the City Hall refused to authorize an opposition rally downtown, about 60 activists attempted to march in the city’s center on Saturday, but were dispersed by police who detained them.

Protests also took place in several major cities in Siberia, but only attracted dozens in each case. In Nizhny Novgorod, some 150 attended an unsanctioned rally, where 85 were held by police.