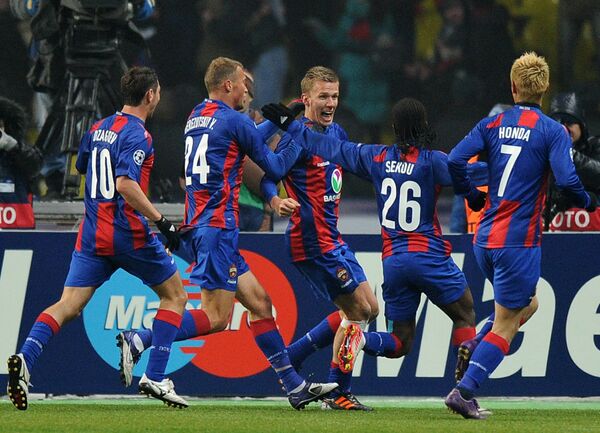 CSKA Moscow face their capital city rivals Dynamo on Friday in a clash that could have a big impact on the Russian Premier League title race.

CSKA Moscow face their capital city rivals Dynamo on Friday in a clash that could have a big impact on the Russian Premier League title race.

CSKA and Dynamo are the two closest challengers to leaders Zenit St. Petersburg, who are top by six points.

Dynamo will take CSKA’s second place if they win, while CSKA have the opportunity to build on their two point lead over third-placed Dynamo, who will also be trying to avoid falling into the clutches of the chasing pack challenging for their Champions League spot.

Last week, CSKA drew 2-2 with Zenit in a thrilling game, while Dynamo slumped to a 1-0 defeat at home to spirited Anzhi Makhachkala side coached by former Russia coach Guus Hiddink.

CSKA will be able to call on goalkeeper Sergey Chepchugov, who was suspended for the game against Zenit, forcing CSKA to field 16-year-old Sergey Revyakin in his Premier League debut.

Fifth-placed Rubin Kazan host sixth-placed Lokomotiv Moscow the same day, where a win for either team could see them leapfrog Dynamo into third, depending on results elsewhere.

Lokomotiv striker Dmitry Sychev said that last week’s home win against Kuban had revitalized Lokomotiv after their defeat to Athletic Bilbao in the Europa League.

“Saturday’s victory revived us a bit after the awful defeat in Bilbao and gave us the confidence that we can achieve anything, and it’s all in our hands,” he said Thursday.

Third-placed Spartak host Anzhi on Monday in Hiddink’s second game in charge of the Caucasus club, who have been training in Turkey ahead of the game to escape freezing temperatures at their training base in Moscow.

Ireland international winger Aiden McGeady make his first start for Spartak since picking up an ankle injury during the winter break, after he featured as a substitute in Spartak’s last game, a 1-1 draw away at Rubin.

In the league’s bottom eight, FC Krasnodar host Terek Grozny on Saturday, in a match between two teams likely to be safe from relegation.

On Sunday, FC Rostov face struggling Krylya Sovetov Samara, who are in the league’s sole relegation playoff spot in 14th.