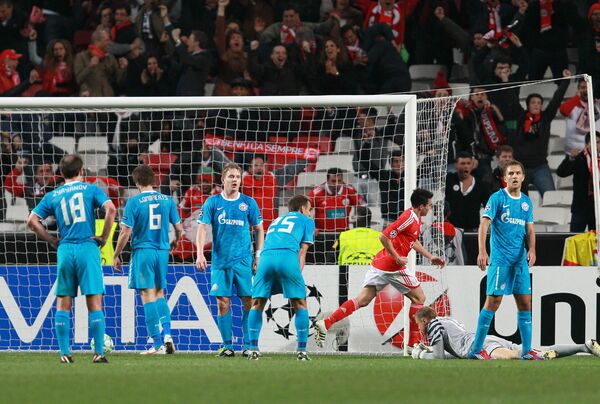 A Maxi Pereira tap-in and a late Nelson Oliveira strike gave Benfica a 2-0 win over Zenit St. Petersburg on Tuesday, sending the Russians crashing out of the Champions League 4-3 on aggregate

A Maxi Pereira tap-in and a late Nelson Oliveira strike gave Benfica a 2-0 win over Zenit St. Petersburg on Tuesday, sending the Russians crashing out of the Champions League 4-3 on aggregate.

The Uruguayan scored in first-half stoppage time with devastating simplicity as he stabbed home from close range after the hosts sliced open the Zenit defense down the right. Substitute Nelson Oliveira chipped over Zenit goalkeeper Vyacheslav Malafeev in second-half stoppage time to make sure of the victory.

Zenit were unable to prize open a watertight Benfica defense, going down after a 3-2 first leg win in St. Petersburg last month to leave the competition at the first knockout round, their best showing ever. A cagey opening burst into life on 14 minutes as Bruno Cesar whipped in a vicious shot from the right that Malafeev pawed away.

Konstantin Zyryanov thumped a free kick into the Benfica wall moments after.

Maxi Pereira swung a low ball dangerously across the face of Malafeev's goal after the hosts neatly carved Zenit open. Javi Garcia found room in the box a slid an effort toward goal but his shot was blocked.

Benfica started to squeeze their visitors as defender Emerson drove long and high and Bruno Cesar sent a second effort just over. But the hosts were almost humiliated on 42 minutes as goalkeeper Artur was caught in possession but managed to race back to his line to save Roman Shirokov's curler.

Alexander Kerzhakov cut in from the right but his shot ricocheted away, the moment from which Benfica broke and took the lead. Zenit seized the initiative after the break but the final pass escaped them during extended periods of possession. Benfica sat back but menaced on the break, and Brazilian center back Jardel missed a free header from a corner on 56 minutes after he escaped Shirokov's marking.

Nicolas Lombaerts blocked a shot from Oscar Cardozo as the game became stretched. Cardozo had another shot on the turn that sailed over.

Cardozo spurned a one-on-one on 70 minutes after inadvertently being played clear by a Ziryanov backheel.

Substitute Viktor Faizulin's cross evaded Kerzhakov on 74 minutes, before Benfica broke and Cordozo rifled a shot straight at Malafeev from the edge of the box.

Jardel headed a second corner over on 81 minutes before Zenit substitute Bruno Alves, the only Portuguese player on the pitch, hit a tame effort from range at Artur. Nelson Oliveira lashed over wildly on a three-on-two break for the hosts five minutes from time, before he dragged wide seconds later.

But he made his last chance count to send the home crowd into raptures.

Cardozo and Pereira scored in St. Petersburg last month, when two goals from Shirokov and a third from Sergei Semak gave Zenit a slender lead going into the second leg.