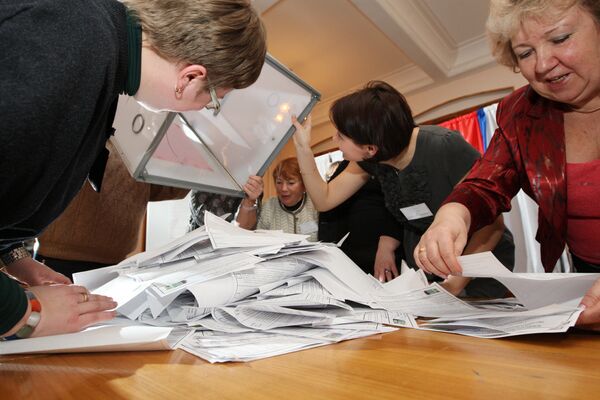 “We see the preliminary report of the OSCE and PACE election monitoring mission in Russia generally balanced but think it contains biased and disputable assessments on a number of issues that we cannot agree with,” Lukashevich said.

He said all remarks in the report will be considered by the Russian Central Election Commission (CEC).

While observers from former Soviet states hailed the vote as “transparent” and “fair,” their colleagues from the Organization for Security and Cooperation in Europe (OSCE) and the Parliamentary Assembly of the Council of Europe (PACE) pointed to mass procedural violations and a clear bias in favor of Putin.

The 59-year-old premier won the Sunday polls with almost 64 percent of the vote, leaving four other candidates far behind and securing himself a third non-consecutive term. His closest rival, Communist leader Gennady Zyuganov, gathered just over 17 percent, while the rest were even less successful.

The OSCE Office for Democratic Institutions and Human Rights (ODIHR), OSCE Parliamentary Assembly (PA) and PACE said in their joint report that “although all contestants were able to campaign unhindered, the conditions for the campaign were clearly skewed in favor of one candidate.”

“Also, overly restrictive candidate registration requirements limited genuine competition. While all candidates had access to media, one candidate, the current prime minister, was given clear advantage in the coverage,” the report, entitled the Statement of Preliminary Findings and Conclusions, said.

Putin, who will be inaugurated on May 7, admitted on Tuesday that irregularities had taken place at March 4 polls and called for a probe. Russia’s election chief, Vladimir Churov, said the March 4 polls were the “most honest, open and transparent” in the world.

The polls triggered protest rallies in Moscow and St. Petersburg on Monday that ended with scores of arrests.

Putin was Russia's president between 2000 and 2008, when he was forced to stand down due to the Constitutional limit of no more than two consecutive terms. He became prime minister after the inauguration of his hand-picked successor, Dmitry Medvedev.

Medvedev’s announcement last autumn that he would not seek a second term and would stand down in favor of Putin triggered resentment among Russia’s nascent middle class, which felt it was being denied active participation in the way the country is run.

Discontent spilled out into the streets after parliamentary polls in December which saw widespread allegations of vote fraud in favor of Putin’s United Russia party.

Leonid Slutsky, deputy chairman of the lower house's international committee, said he hoped PACE would not hold special debates dedicated to the Russian presidential elections at its April session.

Earlier, Tiny Kox, the head of the PACE observer mission, did not rule out that the elections could be discussed in the form of a special debate.