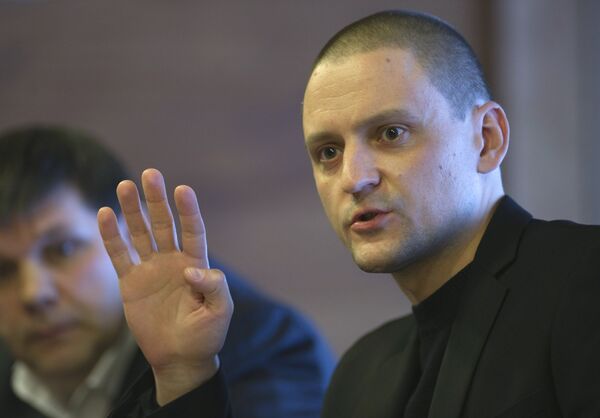 Russia’s anti-Putin protest movement is in talks with the authorities over a new rally in downtown Moscow on March 10, protest organizer Sergei Udaltsov said on Tuesday.

Russia’s anti-Putin protest movement is in talks with the authorities over a new rally in downtown Moscow on March 10, protest organizer Sergei Udaltsov said on Tuesday.

“We are holding negotiations on the location of the rally,” opposition Left Front leader Udaltsov told RIA Novosti. “If no permission is given, the protest committee will decide what to do next.”

Udaltsov was speaking after riot police detained scores of people at a demonstration in Moscow against Vladimir Putin’s landslide victory at Sunday’s presidential polls.

A number of protest leaders, including Udaltsov and famous blogger and opposition figurehead Alexei Navalny, were also briefly detained at Monday’s demonstration at Pushkin Square, a short walk from the Kremlin. Trouble began after some 2,000 protesters refused to leave the square at the end of the approved protest.

Russian investigators said on Tuesday they would open a probe into possible charges of inciting mass disorder during the rally. The charge carries a maximum jail sentence of two years.

“There were no calls for disorder,” Udaltsov countered. “I was at the square and controlled everything.”

Businessman tycoon Mikhail Prokhorov, who took third place in Sunday’s polls and spoke at Monday’s rally, has called for an investigation into police actions.

“I am appalled by the use of force against people who had come to express their civic positions,” he said. “I insist on a probe into the events at Pushkin Square in an open court hearing.”

And Russia’s Foreign Ministry said on Tuesday the officers were “more humane” than police who broke up similar recent protests in the U.S. and Europe

“The police on Pushkin Square were much more humane than at the break-ups of the Occupy Wall St. protest and tent cities in Europe,” a comment in the ministry’s Twitter microblog said.

Sunday’s elections were marred by widespread allegations of electoral violations. The Organization of Security and Co-operation in Europe said in a report that the election was “clearly skewed” in favor of Putin.

But Russia’s election chief, Vladimir Churov, said the March 4 polls were the “most honest, open and transparent” in the world.

Attendance at Monday’s rally was far lower than at previous demonstrations in December and February, which each saw crowds of at least 50,000.

But Udaltsov denied the protest was fading.

“The protest movement is growing,” he said. “Only time will tell by how much.”