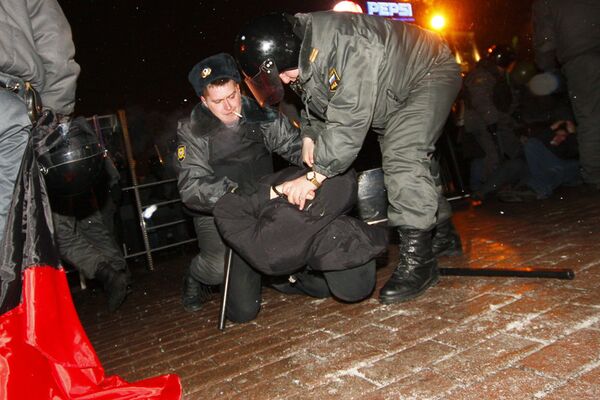 © Photo : Aleksei Nichukin
Subscribe
U.S. Ambassador in Russia Michael McFaul has expressed concern over a crackdown on protesters in downtown Moscow on Monday.

U.S. Ambassador in Russia Michael McFaul has expressed concern over a crackdown on protesters in downtown Moscow on Monday.

“Troubling to watch arrests of peaceful demonstrators at Pushkin square,” McFaul wrote in his Twitter blog. “Freedom of assembly and freedom of speech are universal values.”

Between 14,000 and 20,000, according to various estimates, gathered late on Monday for a sanctioned rally to protest Prime Minister Vladimir Putin’s overnight victory at the presidential polls, which protesters say were rigged.

The event was peaceful until some 2,000 people refused to leave the square after the end of the rally, tried to block the main Tverskaya Street, and pledged to encircle the Kremlin.

Moscow authorities said police acted fast in line with the law and security regulations to prevent the escalation of tensions and potential outbreak of violence.

Meanwhile, Russian billionaire-turned-politician Mikhail Prokhorov, who came third in the March 4 presidential polls with 7.88% of the vote, on Monday demanded a probe into the crackdown on protesters.

“I insist on investigating the events on Puskinskaya Square today in an open court trial,” Prokhorov wrote in his Facebook blog. “I am certain that the use of force and detention of opposition politicians could have been avoided.”

“I am appalled by the use of force against people who came to exercise their civil rights,” he said, adding that the tradition of peaceful opposition rallies in the country had been broken.