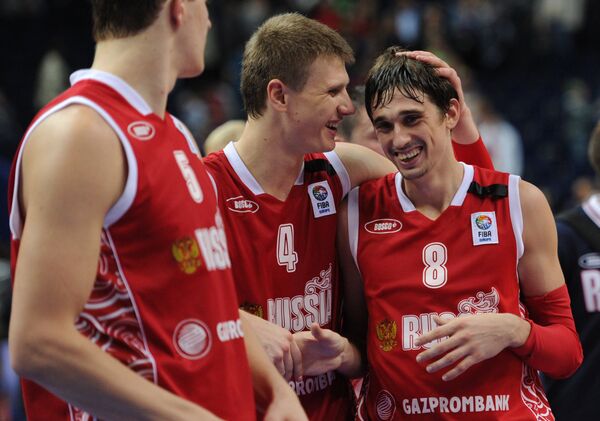 © RIA Novosti . Alexey Philippov
/
Go to the photo bank
Subscribe
The Russian basketball team may struggle to qualify for the 2012 Olympics because of jet lag at the qualifying tournament in Venezuela, Russian international point guard Alexey Shved told RIA Novosti on Monday.

The Russian basketball team may struggle to qualify for the 2012 Olympics because of jet lag at the qualifying tournament in Venezuela, Russian international point guard Alexey Shved told RIA Novosti on Monday.

Russia will be one of 12 teams fighting for three Olympic spots in Caracas in July, three weeks before the Olympic basketball starts in London.

The Russian team would be worn out after little rest since competing in the Eurobasket championships in Lithuania in September, he added.

“We’ve had practically no rest since the European championships. We’ll play out the season, then again training camps and a tournament on the other side of the world.”

FIBA chose Venezuela to host the tournament in December, ahead of bids from Lithuania, Macedonia and Angola, which Shved said came as a shock.

“It was completely mystifying. A long-haul flight, big time difference. Everyone thought that the qualification tournament would be in Lithuania.”

Russia’s 79-71 defeat to France in the Eurobasket semifinals meant that it did not qualify for the Olympics as one of Europe’s two automatic representatives, and will now have to battle against teams like Macedonia, Lithuania and Greece in July for an Olympic place.

Shved was not picked in the 2010 NBA draft, but still dreams of a move to the United States, he said.

“I want to test myself,” he said. “Now I’m at CSKA, and all my dreams are tied to this team. But all basketball players want to play in the NBA, and if they say otherwise, they’re lying.”

Shved has won the Euroleague and two Russian titles with CSKA, as well as a bronze medal with Russia at the 2011 Eurobasket.