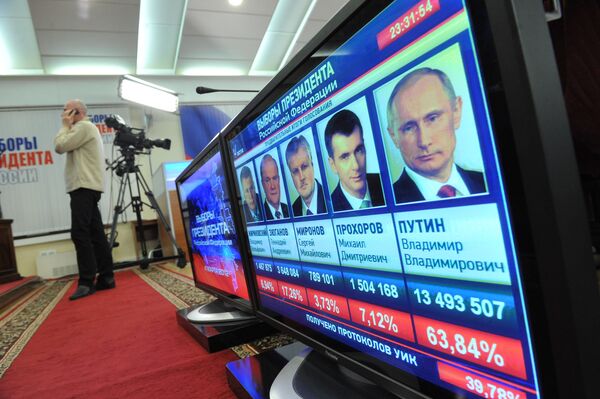 Voting for the Russian presidential elections abroad has just ended in the U.S. West Coast, completing the polls, which began at 3:00 Sunday Moscow time and 23:00 Saturday GMT in Japan.

From Japan to the Middle East and Europe, as well as in the former Soviet republics and in the United States, eligible Russian voters cast their votes from 8:00 a.m. to 8:00 p.m. according to the local time.

No major incidents were reported at the elections.

The Russian diplomatic mission in the United States opened a total of five polling stations; at the embassy in Washington and consulates in New York, San-Francisco, Seattle and Houston. A total of 14 mobile voting stations were also deployed. The results of the vote are expected later in the day.

Vote count, however, has already ended in Brazil, where a total of 384 Russians cast their ballot in three polling stations. According to final results, Vladimir Putin received 45.5 percent of the vote, followed by Mikhail Prokhorov with 28.39 percent and Gennady Zyuganov with 17.45 percent.

Polling stations in Europe saw active participation, with turnout in some countries twice the number of voters that took place in the December 4 State Duma polls.

Putin’s largest success in Europe reported so far was at a polling station in Greece’s Athens and Thessaloniki, where Putin won a sweeping victory with over 84.4 percent and 83.84 percent of the vote, respectively.

Alexei Popov, Russian Consul General in Thessaloniki, said the turnout was 2.5 times higher than in the State Duma elections and until 5 p.m. local time people were queuing outside the Russian diplomatic mission to cast their ballot.

Mikhail Prokhorov won elections in the United Kingdom, where almost 5,000 voters cast their ballot in three polling stations. He received 57.86 percent of the vote, while Vladimir Putin received only 21.78 percent.

A total of eight polling stations opened in Belarus on Sunday. About 5,300 people came to cast their ballot at a polling station at the Russian embassy in Minsk alone, a figure which amounts to the general turnout of last year’s Russian parliamentary elections on the whole territory of Belarus.

Putin received almost 74.4 percent of the vote In Azerbaijan, where over 2,200 people cast their ballot at two polling stations, in the capital Baku and in the city of Gabala, where Russia leases an early-warning missile radar station.

Vote count is still underway in the former Georgian republics of Abkhazia and South Ossetia, where the majority of residents have Russian citizenship.

About 8,000 people are estimated to take part at a vote in Armenia, including servicemen of a Russian military base and border troops, however, the exact figure is yet unknown, as well as the result of the polls.

Russians living in Georgia were ferried by buses to a polling station in the Armenian city of Gyumri, where they could cast their ballot. Voting was not organized in Georgia as Moscow and Tbilisi broke diplomatic ties after the 2008 war over the breakaway territory of South Ossetia.

A total of 3,559 Russian passport holders cast their ballots in Turkmenistan, where Putin was supported by a hefty 82 percent of the vote.