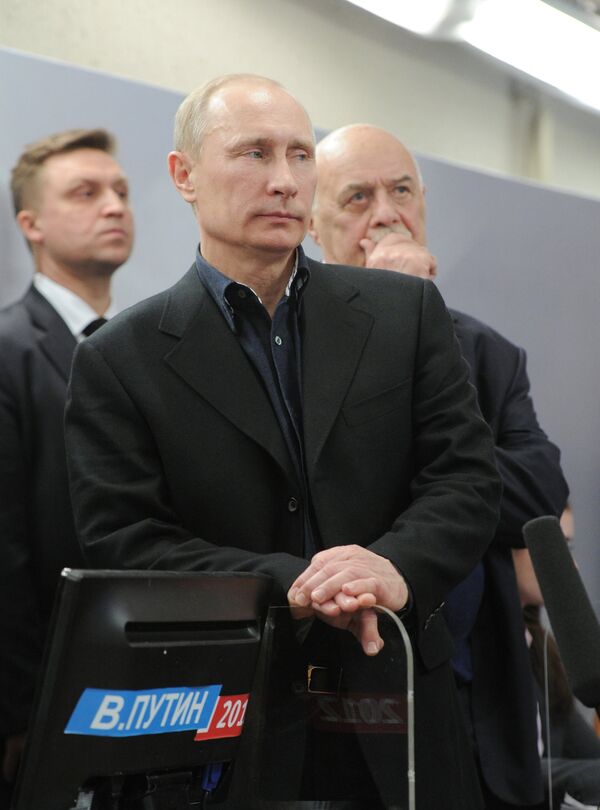 Russian political experts said Russian Prime Minister Vladimir Putin gained a convincing victory in the March 4 presidential elections and a major reshuffle in the Russian government is to follow.

Experts say Putin will have to fulfill his campaign platform and continue the political reform in the country in order not to disappoint his supporters.

First deputy secretary of the Russian Public Chamber Grigory Fyodorov said: "The elections were valid, and this is clear to everyone, even to the opposition. Even if we sum up all violations which took place – and they, naturally, did – this won’t affect the existing results in any way. Putin was to win in the first round, he is just more popular. Figures are figures.”

Alexei Mukhin, the head of the Moscow-based Center for Political Information think tank said that though the vote count continues, it is evident that Putin is winning with a wide margin and the general trend would hardly change.

"Those coming third and fourth may swap places, but not the first, second, let alone the last place,” he said.

“Taking into account that he is seeking his third presidential term, as well as the past economic downturn, intense street activity, such as protests, and the fact that Putin’s predecessor was one of his supporters… all this creates an array of factors that complicated his return,” said Orlov, who appeared on behalf of Putin in televised election debates.

Political scientist Pavel Svyatenkov said it was still unclear whether the society will recognize the election results.

“The most important thing is to understand whether this result will be vested with legitimacy, or it won’t be recognized by the society and the country will plunge into a smoldering political crisis for months or even years,” Svyatenkov said.

Experts believe that some opposition candidates will attempt to challenge the results of the vote, but they are unlikely to succeed.

Communist leader Gennady Zyuganov, who came second in the polls, said he “cannot recognize these elections as fair, honest and worthy.” Orlov said such harsh statements are unusual for Communist leaders, who used to make allegations of that kind only after analyzing the overall data and filing lawsuits.

"I hope that Zyuganov would eventually recognize the results of the polls and will continue his regular work in the State Duma as an opposition leader,” he said.

Independent candidate Mikhail Prokhorov, who is coming third with 90% of the vote counted, said he would express his opinion on the legitimacy of the polls after a thorough analysis of the situation. Sergei Mironov and Vladimir Zhirinovsky have already congratulated Putin on his election victory.

Mikhail Vinogradov, head of the Petersburg Politics Foundation think tank, said, on the contrary, that statements by Zyuganov and Prokhorov were predictable.

“So far, I don’t see any levers they could use to influence the situation, if only they do not focus on delegitimizing Putin. At the moment, the opposition was not ready to such harsh tactics,” he said.

Fyodorov said the issue of the vote’s legitimacy will definitely be raised by representatives of the radical opposition.

“They will try to escalate the situation, provocations are possible, so the authorities should not relax,” he said.

Experts also spoke about policies that Putin would have to pursue as the head of state.

Fyodorov said that if Putin tries to “rest on his laurels” and will not implement his campaign promises, it may “provoke dangerous radical processes in the society.”

The statement echoes that of political scientist Vladimir Slatinov of the Institute of Humanitarian and Political Research, who says that Putin will have to live up to his supporters’ expectations or he risks losing the support rapidly.

“He [Putin] managed to mobilize the paternalist electorate. He was able to boost expectations. Now it’s time to pay the bills. His failure may result in strong frustration in the groups that supported him just yesterday,” he said.

Experts say that shortly after taking office Putin will reorganize the government, but it was too early to speak of it in details.

“We can speculate on who will leave, but it’s too hard to predict who will replace them. I expect surprises,” Slatinov said, adding that three cabinet members - health and social development minister Tatyana Golikova, science and education minister Andrei Fursenko and transport minister Igor Levitin were the most likely candidates for leaving the government.

Orlov said, in his turn, that the new government will be formed “based on professional qualities and efficiency of the ministers’ work, not on the principles of reshuffle.”