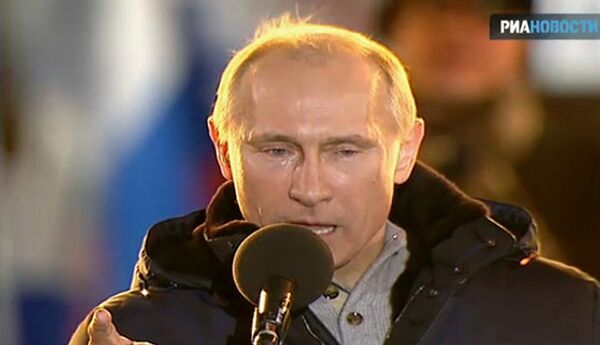 Vladimir Putin secured a third term in the Kremlin on Sunday after recording a resounding victory at Russia’s presidential polls amid allegations of electoral violations.

Vladimir Putin secured a third term in the Kremlin on Sunday after recording a resounding victory at Russia’s presidential polls amid allegations of electoral violations.

"We won in an open and honest fight!" a jubilant Putin, flanked by outgoing President Dmitry Medvedev, told a crowd of tens of thousands of supporters at a rally in downtown Moscow. "We urge everyone to unite around the interests of Russia."

"I told you we would win and we won!" he said, his voice cracking with emotion and his eyes moist.

“I cannot recognize these elections as fair, honest and worthy,” Zyuganov said. "I see no reason to congratulate anyone."

The elections took place against the backdrop of mass demonstrations that were triggered by allegations of vote fraud in favor of Putin's United Russia party at December's parliamentary polls.

Protest leader Yevgenia Chirikova told RIA Novosti that she had witnessed “disgusting” vote fraud at a polling station in her hometown of Khimki, just outside Moscow.

“I don’t know why anyone would need such a victory,” she said. “There have been so many people insulted not only here, but all across Russia that it’s frightening to think what will happen tomorrow.”

"These were not elections, but a disgrace," opposition Left Front movement leader Sergei Udaltsov said on his Twitter blog. "They spat in our faces again. "Tomorrow we hit the streets!"

There was a heavy security presence in downtown Moscow, with trucks full of riot police parked outside major metro stations.

The Russian Interior Ministry acknowledged reports of violations but said they had not been sufficient to impact the result of the vote.

Election officials said the vote at a north-west Moscow polling station could be annulled over reported violations. Results from a number of polling stations in the North Caucasus republic of Dagestan were also being looked into, election officials said. Observers representing Putin's campaign also reported a number of violations at the elections, mostly of a “technical” nature.

The mood at Putin headquarters was celebratory.

“Today is a clear sign that the people have made their choice for a great Russia,” said Russian film director and Putin supporter Nikita Mikhalkov. “The part of the opposition that does not listen to anything and tries to declare the elections illegitimate doesn’t interest Putin.”

Some 70,000 Putin supporters celebrated near Red Square as the results of exit polls were released.

"He's an ideal president!" a young woman said at the celebration, which was shown on state television.

Other participants told RIA Novosti they had come to downtown Moscow for a pop concert and had no idea a Putin rally was due to take place.

None of the candidates opposing Putin represented the burgeoning protest movement, although all have - to varying degrees - expressed sympathy with its demands, which include a rerun of last year's vote.

Zyuganov urged earlier protesters "to show restraint and comply with the law."

Russia's largest independent election watchdog, Golos, listed on its website almost 3,000 reported violations. These could not be independently verified.

Putin had ordered web cameras installed at 91,000 of Russia's 96,000 polling stations in an attempt to prevent the elections being marred by vote fraud allegations.

Almost 700 international observers monitored the elections, including from the Organization for Security and Cooperation in Europe, the Commonwealth of Independent States Council's International Assembly, and the Parliamentary Assembly of the Council of Europe.