Amid Russia Discord, All Say Violence is ‘Lose-Lose’ Option 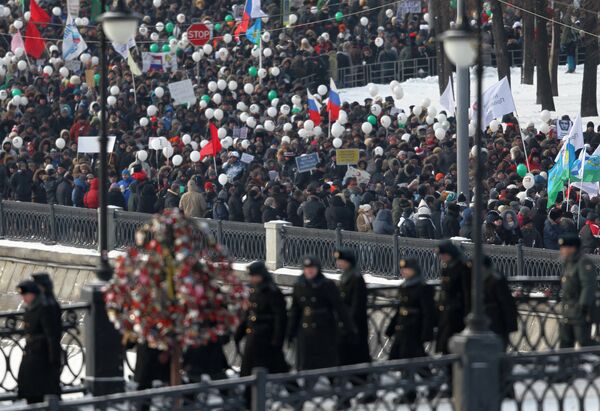 They disagree on much, but supporters and opponents of Prime Minister Vladimir Putin say they are united on at least one point: The need to keep the unprecedented public demonstrations that have been peaceful all winter from taking a violent turn.

They disagree on much, but supporters and opponents of Prime Minister Vladimir Putin say they are united on at least one point: The need to keep the unprecedented public demonstrations that have been peaceful all winter from taking a violent turn.

“The people’s mood is peaceful, and that includes the protest leaders,” said Konstantin Krylov, a nationalist activist and a co-organizer of recent protests. “What everybody wants is the peaceful transformation of the political system.”

Both backers and critics of Putin’s bid to return to the Kremlin in presidential elections on Sunday have already received permission to hold more public gatherings next week in Moscow and both sides have acknowledged that the potential for peaceful demonstrations to see incidents of violence exists.

Putin himself cautioned Wednesday that his opponents could in theory go so far as to “knock someone off” among their own ranks and then blame it on the authorities in a planned effort to discredit his effort to return to the presidency.

But like his critics, the Russian prime minister and his supporters have consistently stressed that their intentions have been and will remain peaceful and both have insisted on their determination to keep the specter of violence from becoming anything more real.

“No one wants a riot,” said Krylov. “What everybody wants is peaceful transformation of the political system.”

Ilya Yashin, a liberal activist and co-organizer of mass opposition rallies in recent months, echoed that view, saying: “Our tactic is peaceful, non-violent protest. We may begin to act more decisively, but never violently. Pogromists are never supported by the majority.”

The government, too, in contrast with crackdowns on public political demonstrations seen in Russia in past years, has in recent months demonstrated its readiness to accept peaceful, legal protest with law enforcement bodies allowing them to proceed with minimal arrests or interventions.

Both sides say that any serious violence at demonstrations would harm not only their own political causes but would do more damage to Russia as a whole than to any particular political figure or movement.

"The authorities will not obstruct the rallies,” a Kremlin source told RIA Novosti, adding however that police be required to act should demonstrators at either pro- or anti-government rallies violate the law or threaten public order.

Sergei Udaltsov, another liberal opposition protest organizer, said the authorities seemed aware of the need to allow non-violent government critics fair outlets for expressing their opinions publicly. Failure to do so, he said, could lead to “riots”, adding: “We don’t need this.”

Some of the protest leaders are walking a fine line between peaceful demonstration and encouraging violence. At a rally on December 24 in Moscow, whistleblower Alexei Navalny threatened a "march on the Kremlin" if opposition's demand for a repeat parliamentary vote. The Kremlin rejected an election re-run.

"The authorities will not forgive it," said Sergei Markov, a pro-Kremlin pundit and Putin's campaign aide, referring to the possibility that violence could erupt during demonstrations.

Some rallies that followed the December 4 parliamentary elections however have been tense. The first ended in mass detentions; water cannons were deployed for follow-up rallies in December; City Hall seemed likely to ban a rally on February 4, changing course only when organizers threatened to rally in defiance of the ban; and pro-Kremlin youth activists staked preemptory claims last week on all venues requested by opposition groups for post-election rallies.

Putin's campaign aide Markov said he was not aware of any contingency planning for the law enforcements in case of riots.

He was echoed by Mikhail Pashkin of the Moscow police labor union, who said rank-and-file police make no special preparations for the protests, though they were placed on high alert - a regular measure during elections.

Analysts said however that political tension could be eased with dialogue between the Kremlin and opposition movements – a thing Putin promised Thursday to pursue.

“Our proposals are aimed at launching dialogue with everybody, both with our supporters and critics” Putin said in a meeting with editors of leading international newspapers.

The government has proven it is capable of finding compromise with its opponents, agreeing to let protests go ahead unhindered and proposing various concrete political reforms.

If they are too slow and too piecemeal, however, those efforts could be dismissed by critics who are pressing for rapid and sweeping liberalization, Mukhin said.