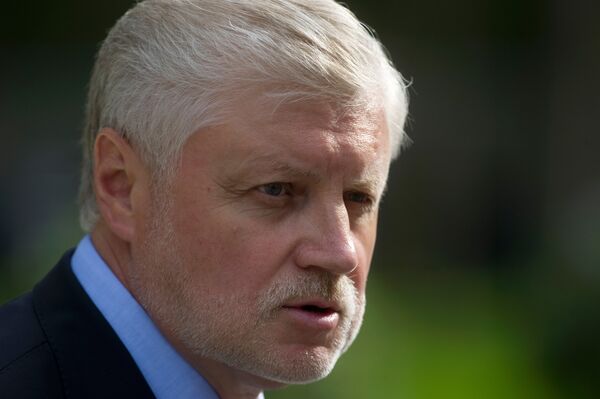 A friend of current Prime Minister Vladimir Putin from their St. Petersburg days in the 1990s, Mironov got the cushy job of speaker for the Federation Council, the parliament’s upper chamber in 2001. In 2006, he was also made the head of the newly created A Just Russia, a Kremlin spoiler for the Communists, which is where his troubles began.

A Just Russia gradually discovered the only way to political survival was to target the ruling United Russia, not the opposition Communists, but the party in power took offense when its own ratings started to sag. Mironov struggled to balance his attacks on the ruling party with his personal loyalty to Putin – who heads United Russia – but found it increasingly hard to do, especially after United Russia ousted him from the Federation Council job, pushing him toward an opposition stance he has struggled to clearly embrace.

Most of A Just Russia is decidedly anti-Kremlin, with party leaders co-staging anti-government protests in Moscow this winter, but Mironov is seen by many voters as the notable exception. If the party had fielded anyone else for the presidential race, the “stalking donkey” could have had a good run at carrying the protest vote. But candidate Mironov, who ran in 2004 even while professing support for Putin and winning 0.75 percent of the vote, will put off the malcontents.

To his credit, Mironov has made some bold statements, being the only candidate on the ballot who supported the opposition’s demands for the next president to implement political reforms and resign within a year or two. But it will take more than a few daring promises to undo the reputation of a Kremlin yes-man that Mironov spent years cultivating. Pro-government voters, meanwhile, have no need for him because they already have Putin.

“Not a Kremlin project”

Prokhorov is the only new face on the ballot, and the center of this election’s intrigue. A mogul who made his fortune in metals with an estimated fortune of $18 billion, he was best known for his glitzy playboy lifestyle and high-profile business ventures such as purchasing the New Jersey Nets basketball team. Then he suddenly dived headfirst into politics, heading The Right Cause, a failed Kremlin project to win the middle-class vote from the late 2000s. But when Prokhorov rocked the boat by launching a vigorous campaign bordering on populism, he was promptly ousted from The Right Cause in what he called a government-orchestrated coup, orchestrated, he claimed, by former deputy Kremlin chief of staff Vladislav Surkov. In December, he announced his presidential bid and was the only one of three independents to be accepted by the Central Elections Commission – reviving suspicions from critics that the Kremlin was sanctioning his role.

Most voters are convinced Prokhorov is a Kremlin project, but for many, it would not matter: a large part of the populace just wants to vote against Putin, and on that basis, any candidate will do. Though the old and the poor would prefer Communist Gennady Zyuganov, many in the middle class are likely to opt for Prokhorov, who braved street protests this winter (getting pelted once by snowballs from anarchists). He has made the right political noises for the middle class and young, setting out an admittedly populist program of reform, promising political freedoms, improving the economic climate and reining in the bureaucracy – in essence, dismantling the legacy of Putin, who is the main target of protesters. But Prokhorov also flirted with the ruling establishment, saying he would not mind being a prime minister under a victorious Putin, or even keep him as the head of the government if Prokhorov himself ascends to the Kremlin.

A mid-level KGB officer in the 1980s and a City Hall official in St. Petersburg in the 1990s, Putin was catapulted to the ranks of the world’s most powerful men after President Boris Yeltsin endorsed him as his successor in 2000. Putin traded the Kremlin job for the top seat in the government after two presidential stints in 2000-2008 because the Constitution prohibits more than two consecutive presidential terms, but installed in his place Dmitry Medvedev, his loyal retainer who meekly agreed last fall not to seek reelection and trade places with Putin after the March 4 vote.

Putin’s supporters credit him with bringing stability to the nation after the “turbulent nineties,” reviving the economy and ensuring that teachers, doctors and other state employees no longer live below the poverty line, mainly thanks to Russia’s vast windfall from oil and gas revenues. But critics say Putin ushered in a bureaucratic regime, giving state officials unchecked powers in exchange for loyalty, which resulted in political stagnation, skyrocketing corruption and dismal economic performance. Russia ranked 143rd of 183 countries in Transparency International’s latest corruption rating, and capital outflow in 2011 stood at $84 billion.

The main question is whether the biggest figure in Russian politics can avoid a runoff, which he has never faced before. A second round would undermine his claims of being a national leader and the legitimacy of his policies are questioned by a growing number of malcontents, and would mean he faces a united, rather than split, opposition vote. Putin’s core constituency is very broad, including the huge number of state employees, the low-paid residents of small towns, and the vast number of Russians who crave stability rather than change.

Putin has been around for 12 years now, however, and fatigue is beginning to set in among many voters who want to see more. The fledgling middle class, meanwhile, vehemently opposes Putin: it already rallied against him in the tens of thousands after his party, United Russia, won the parliamentary elections in December, accusing the authorities of foul electoral play.

In his recent statements to the media, critics see little that promises anything except more of the same in a future term. Or maybe two. His supporters will vote for just that.

The loyal voice of populism

The enfant terrible of Russian politics, infamous for slogans such as “a guy for every broad, a bottle of vodka for every guy,” his Liberal Democratic Party led the 1993 parliamentary vote with 22 percent. Zhirinovsky’s career has since encompassed many a brawl with opponents on camera and incendiary statements. But his party never developed a wider following – though retaining a presence in all five Dumas since – and Zhirinovsky’s presidential campaigns in 1991, 1996, 2000 and 2008 fared no better.

Many Russians see that Zhirinovsky’s image and rhetoric contrasts sharply with his acquiescence with the political status quo. Though he excels in lambasting the authorities, his party has always sided with the Kremlin on all important issues. The party acts as a lightning rod for popular nationalism: the Liberal Democrats are the only mainstream political force allowed to flirt with it, but their campaign slogan for the December parliamentary elections, “LDPR for Russians,” was not backed with any legislative action. Zhirinovsky’s policies will win votes with many “boot-wearing” Russians, especially among the poor and uneducated, but he is likely to find few friends among the growing number of middle-class voters seeking change.

Zhirinovsky is the least likely of the five candidates to offer any surprises during the campaign and he has no new tricks to sway voters outside his usual constituency. The fatigue factor is also there: like Putin and Zyuganov, he has probably been around too long to inspire new voters.

A Party man to the bone, Zyuganov has been a career Communist since the 1970s, and did not quit even when the party no longer was in power. The head of the Communist Party of Russia for 19 years, Zyuganov’s hour of glory came in 1996, when he was a hair’s breadth away from defeating Boris Yeltsin in the presidential race – but he lost. He has remained a fixture of the Russian political scene since, and lost two more presidential elections, in 2000 and 2008, to no one’s great surprise.

The Communists are the most powerful political force in the country not directly controlled by the Kremlin. They have learned to accommodate the system, however, and critics have often accused Zuyganov and his party of covertly coordinating their actions with the Kremlin. Perhaps a more serious concern, however, is the party’s reluctance to modernize by embracing a European-styled social-democratic stance that might have wider appeal. The Communists stick to the past, resolutely touting Soviet-era slogans including even Josef Stalin, impressing only their ever-shrinking hardcore of grey-haired supporters.

If the public is tired of Putin, the same goes double for Zyuganov, who has been in impotent opposition for two decades without any real responsibility. But he, along with Mikhail Prokhorov, is one of the two candidates most likely to pick up the votes of those who just want to vote “against Putin” (not an option directly available on the ballots). He may find it hard going in a runoff against Putin, with many older Russians unlikely to want a return to the past, and younger voters not connecting with his tired image.