First Signs of Thaw Between Russia and Georgia 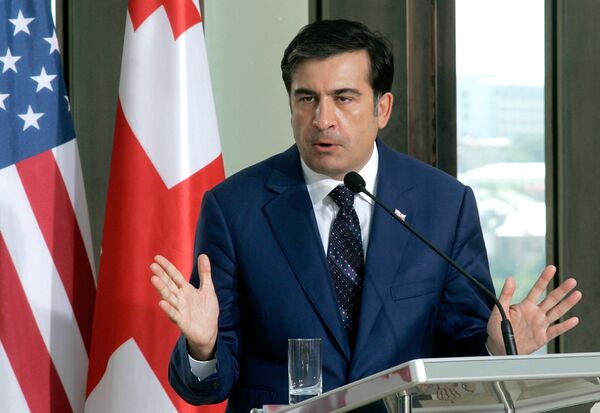 Several statements by top Russian and Georgian officials suggest that a mild thaw in bilateral relations may be in the offing.

Several statements by top Russian and Georgian officials suggest that a mild thaw in bilateral relations may be in the offing.
First, President Dmitry Medvedev said at a meeting with journalism students at Moscow State University that “we are absolutely ready to restore diplomatic relations – we did not sever them.”
Later, during a meeting with military commanders on February 20, Prime Minister Vladimir Putin said that he hopes very much that “our Georgian brethren…will realize once and for all that Russia is not an enemy and that our relations with Georgia will be restored.”
Finally, on Wednesday evening Georgia unilaterally rescinded visa requirements for Russians.  Speaking in parliament the day before, Georgian President Mikheil Saakashvili proposed visa-free entry for Russian citizens. “Let every Russian citizen know that he or she can come to Georgia without a visa – to do business, here, spend vacations at our resorts and visit family and friends.” He added that “the Georgian authorities will do all they can to facilitate visits by Russian citizens to Georgia.” What’s behind this move?

What does Georgia want from Russia?
Tbilisi’s official position essentially boils down to these demands: closure of Russian military bases in Abkhazia and Ossetia; closure of Russian diplomatic offices there; and access of Georgian customs officials to the Russian border with Abkhazia and Ossetia.
Any realistic Georgian politician understands that Russian will never make these concessions. So what does Georgia (or rather its citizens) really want from Russia?
According to estimates of Georgian NGOs, about one million Georgians live and work in Russia. Practically every Georgian citizen has a relative in Russia. Clearly, then, visas and direct air travel to and from Russia are a top priority.
Direct air travel has been practically restored, which makes it much less expensive for Georgians to visit Russia. Direct flights between Russia and Georgia are performed by the Russian S7 Airlines (Sibir Airlines) and the Georgian Airzena-Georgian Airways (formally, they perform charter flights but tickets can be booked just like regular ones).
Georgian representatives made it clear to Moscow on numerous occasions that they are interested in easier visa procedures with Russia or even visa-free travel within the context of a “mild thaw.”
Georgia has also repeatedly emphasized that it has a stake in returning its products to the vast Russian market that is now part of the even bigger market of the Common Economic Space. There have been positive changes on this front as well. On February 3, Russian Deputy Foreign Minister Grigory Karasin said there are no political factors preventing the return of Georgian goods to the Russian market. He added that Russia’s trade and sanitary inspection authority (Rospotrebnadzor) is now reviewing the documents on alcohol and mineral water from Georgia.
This statement was met with a rapid response from Tbilisi. Georgian First Deputy Foreign Minister Nikolai Vashakidze said that his ministry does not object to the return of Georgian wines and other products to the Russian market.

What does Russia want from Georgia?
No doubt, Moscow wants to leave August 2008 in the past and try to bring Georgia closer to it in the strategic perspective. Russia and Georgia have long been bound by historical, cultural and religious ties.
There is also a more immediate, tactical concern – to guarantee security at the 2014 Winter Olympic Games in Sochi.
After the armed conflict in 2008 and Russia’s recognition of Abkhazia and South Ossetia, the security of the Winter Games (in addition to the Georgian veto on Russia’s WTO entry) became Tbilisi’s main source of leverage over Moscow.
Georgia announced a while back that is was considering boycotting the Games. Tbilisi urged the world community to bring pressure to bear on Russia as “the aggressor country,” as was done during the Soviet preparations for the 1980 Summer Olympic Games in Moscow after the introduction of Soviet troops in Afghanistan.
Not to disrespect Georgian athletes, but their absence would hardly affect the level of competition at the Games. It is highly unlikely that any other country will follow this example.
What Moscow is most concerned about is a possible attempt by Tbilisi to destabilize the North Caucasus and the Krasnodar Territory in Russia.
Georgia continues to point out that the Games will be held on the site (including Krasnaya Polyana) of what it considers to be genocide against the Circassians in 1863-1864, during Russia’s war in the Caucasus.
Such statements are made with the express purpose of fanning separatist attitudes in an effort to disrupt or, at least, seriously complicate Russia’s hosting of the Games.
The Olympic Committee and the Foreign Ministry of Georgia even made a special statement to “friendly governments” to the effect that holding the Games near the borders of the North Caucasus republics of Chechnya and Ingushetia and the “rebel” Abkhazia may provoke an uptick in terrorist activities in the region.
Russia is concerned about the possibility of provocations on the border with Abkhazia, both in the run-up and during the Games, which would inevitably escalate tensions in all southern regions of Russia, primarily Sochi, the host city.
However, Georgia and especially its business community do not stand to gain anything by ratcheting up tensions in the region, whereas restraint could produce a boon for Georgian business.

The road map of the “thaw”
Diplomatic relations between our countries were severed by Tbilisi after the events of August 2008. Formal bilateral relations are now conducted through Swiss mediators, namely the Interests Sections at the Swiss embassies in Moscow and Tbilisi.
There is a long road ahead to the full restoration of diplomatic relations, which remains unlikely in the short to medium term.
The experience of the Soviet Union and Israel could serve as a model in this case. They broke off relations at the start of the Six-Day War in June 1967.
A Soviet consular mission was established in Israel in July 1987 as an Interests Section at the Finnish Embassy. In November 1990 the sides signed a Soviet-Israeli agreement on scientific and technical cooperation. They restored full diplomatic relations only in October of 1991 (direct flights were reestablished at the same time).
A number of sources report that in the near future Tbilisi may offer Moscow the opportunity to upgrade the status of the Interests Sections, which would be largely in keeping with the Soviet-Israeli model.
Switzerland has become the chief mediator in Russian-Georgian relations. It also performed this role in bilateral talks on Russia’s accession to the WTO.
Russia and Georgia let Switzerland choose a private company for monitoring the movement of cargo on the Russian borders with Abkhazia and South Ossetia.
It appears that Bern will continue to actively search for points of contact between Moscow and Tbilisi.
The invitation of Georgian companies to take part in preparations for the Games in Sochi could lead Tbilisi to adopt an adequate policy toward Russia. In this case Georgia may receive an influx of Olympic investments, just as Abkhazia did. This will have an effect on the Georgians involved in this work.
In terms of cultural relations, it is difficult to overstate the importance of dialogue between the Russian Orthodox Church and its Georgian counterpart. These two churches have managed to preserve very warm relations even during peaks of political tensions between Russia and Georgia.
Hope has emerged that the nascent thaw in bilateral relations will not give way to a new chill.

Innokenty Adyasov is a member of the expert council of the State Duma Committee for CIS Affairs
The views expressed in this article are the author’s and may not necessarily represent those of RIA Novosti.