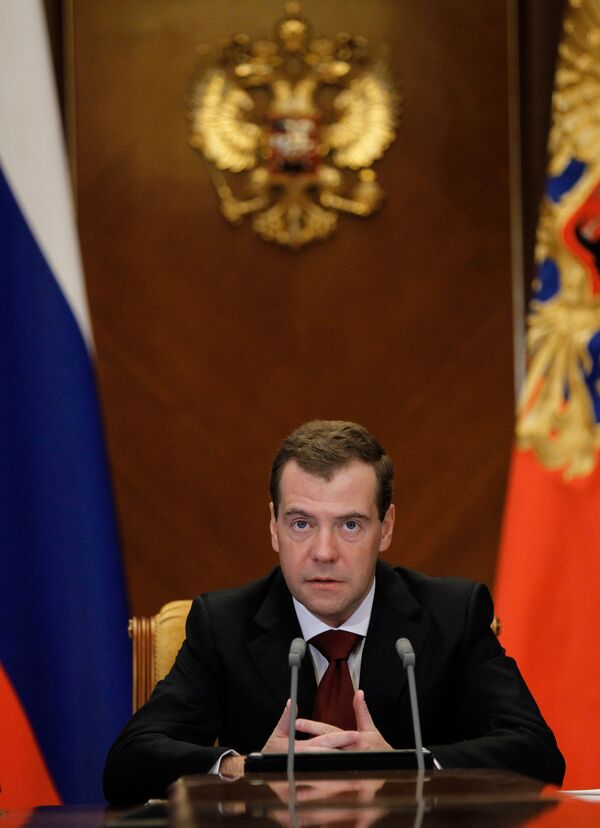 © RIA Novosti . Dmitriy Astakhov
/
Go to the photo bank
Subscribe
In a televised address to the nation on Friday, Russia’s outgoing President Dmitry Medvedev called on citizens to go to polling stations on Sunday to elect a new president.

In a televised address to the nation on Friday, Russia’s outgoing President Dmitry Medvedev called on citizens to go to polling stations on Sunday to elect a new president.

“We all want positive changes; whether in the city or in the village, we all want our country to be democratic and prosperous and our people to have a decent and happy life,” Medvedev said. “We all need order and justice, and strict observance of human rights and freedoms.”

The future president, he said, should “work efficiently” to make citizens’ lives better by improving the country’s economy and defense and strengthening its image in the international arena.

“Only you, voters, can decide who of the candidates deserve your votes,” Medvedev said. “I am sure you will make the right choice.”

Medvedev, who has served one term as Russia’s president since 2008, agreed to step aside to allow Putin to run for his third, non-consecutive term in the Kremlin. Medvedev is expected to become prime minister in the next government.

The outgoing president said the election campaign took place amid growing civil activity in Russia which has shown that its society has become mature enough to clearly present its demands to the authorities.

“This means our citizens understand that our future depends on the upcoming elections,” he said. “They are ready to take their share of responsibility for our country.”

Medvedev said political reforms that he had proposed late last year were designed to “help our people participate more actively in governing the country.”

On Tuesday, the lower house of Russia’s parliament, the State Duma, approved in the first reading presidential bills designed to improve political competition in the country and reintroduce direct elections of governors.