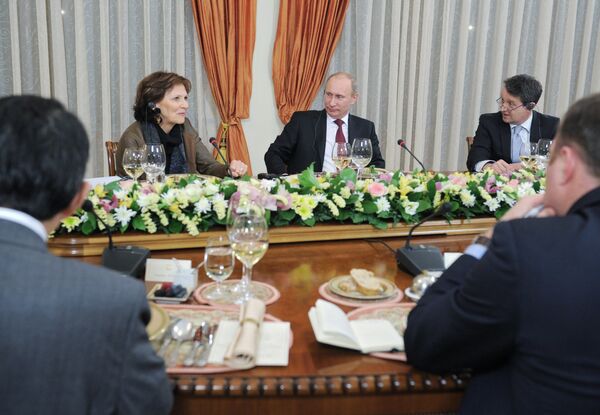 Washington’s talks with Moscow on European missile defense failed because U.S. negotiators were unwilling to put their oral proposals to Moscow on paper, Russian prime minister and presidential candidate Vladimir Putin has said.

Washington’s talks with Moscow on European missile defense failed because U.S. negotiators were unwilling to put their oral proposals to Moscow on paper, Russian prime minister and presidential candidate Vladimir Putin has said.

“They made some proposals to us which we virtually agreed to and asked them to get them down on paper,” Putin said during an interview with editors-in-chief of six foreign newspapers in his Novo-Ogaryovo residence outside Moscow.

“They made a proposal to us just during the talks, they told us: we would offer you this, this and that. We did not expect this, but I said: we agree. Please put it down on paper,” Putin said.

“We were waiting for their answer for two months. We did not get it, and then our American partners withdrew their own proposals, saying: no, it’s impossible,” he added.

He explained that those “proposals” included guarantees that the U.S.-NATO European missile shield would not be directed against Russia. For example, Russian specialists would be allowed to carry out round-the-clock monitoring of the anti-missile components, and their radars systems would be cemented so that they were directed exactly at Iran and “were technically unable to turn towards Russia.”

“This would not change the situation dramatically, but we said: ok, it's already something, we agree. Put it down on paper. But they refused,” Putin said.

NATO members agreed to create a missile shield over Europe to protect it against ballistic missiles launched by so-called rogue states such as Iran and North Korea at a summit in Lisbon, Portugal, in 2010.

Russia has demanded that NATO provide written, legally binding guarantees that its missile shield will not be directed against Moscow, but the alliance has been reluctant to meet the demand.

The editors-in-chief of France’s Le Monde, Britain’s The Times, Italy’s La Repubblica, Germany’s Handelsblatt, Canada’s The Globe and Mail and Japan’s Asahi Shimbun newspaper participated in the interview with Putin.