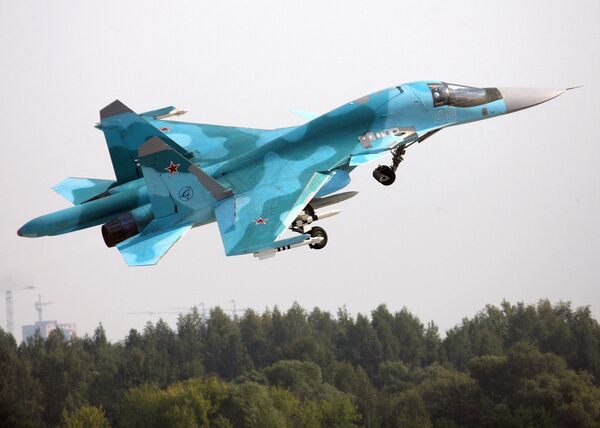 The Russian Defense Ministry has signed a deal for 92 Su-34 Fullback fighter-bombers from the Sukhoi aircraft maker, the ministry said on Thursday.

The Russian Defense Ministry has signed a deal for 92 Su-34 Fullback fighter-bombers from the Sukhoi aircraft maker, the ministry said on Thursday.

The deal under which the warplanes are to be delivered by 2020 was signed by Defense Minister Anatoly Serdyukov and Sukhoi General Director Igor Ozar.

This is one of the largest warplane contracts under the government arms procurement program and it will help replace all of the Su-24 bombers currently in service with the “4+ generation” aircraft, Serdyukov said.

The Ministry will take delivery of 10 Su-34s in 2012, all of them to be deployed in the Western Military District. Last year six fighter-bombers were delivered to the Air Force. These come under an initial contract for 32 Su-34s.

Factoring in the new contract, the Air Force will have a total of 124 Su-34s.

Commenting on the deal, Douglas Barrie, air warfare specialist at International Institute for Strategic Studies in London, said “the Su-34 - previously known as the Su-27IB - has been long in the gestation.”

“The program began in the 1980s and has suffered as a result of funding problems. It is entering service well over a decade after it was envisaged originally to be replacing the Su-24 Fencer.”

However the Su-34 will - with the appropriate avionic and weapons systems - provide the air force with a capable long range strike platform, with considerably more punch than the Su-24, he said.

“Work is continuing to integrate modern air-to-surface weaponry now in development in Russia on the Su-34, with trials being carried out at the air force test center at Akhtubinsk.”

The news of the contract comes a week after Russia partially resumed flights of Su-24 Fencer tactical bombers after one of them crashed in Russia’s Urals.

All Su-24s were grounded after the crash, in the woods of the Kurgan region during a routine flight on February 13. Both pilots ejected safely. The crash was the third of a Su-24 in Russia over the last four months. The two previous crashes occurred in October and December 2011.

It has been in service with the Russian Air Force since the mid-1970s. However, in recent years Russia has gradually been phasing out the planes, which have a patchy safety record.

The Defense Ministry earlier said the Air Force will procure over 1,500 new aircraft by 2020.

Russia started the full-scale production of Su-34s in 2008 at a Novosibirsk-based aircraft-manufacturing plant, a subsidiary of the Sukhoi Aircraft Holding.

It is designed to deliver high-precision strikes on heavily-defended targets under any weather conditions, day or night, and is equipped with a 30-mm GSh-301 cannon, up to 12 Alamo or Archer AAMs, ASMs, and bombs.