Russia Ease to 2-0 Win in Denmark 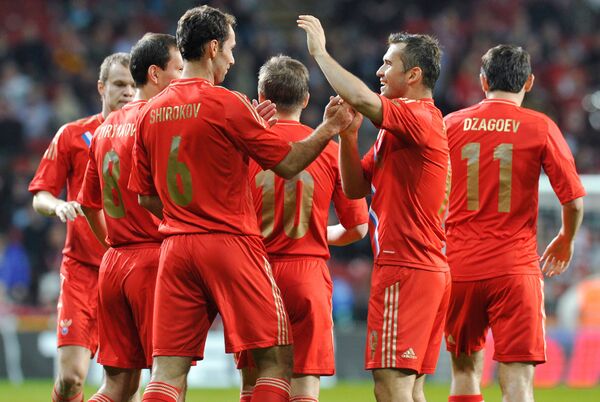 First-half goals from Roman Shirokov and Andrei Arshavin eased Russia to a 2-0 friendly win against Denmark late on Wednesday.

First-half goals from Roman Shirokov and Andrei Arshavin eased Russia to a 2-0 friendly win against Denmark late on Wednesday.

Shirokov scored with the first effort on goal all night just three minutes in, collecting the ball from Arshavin on the left and firing across goalkeeper Thomas Sorensen from the edge of the penalty area.

Arshavin doubled the lead with the last kick of the first half as Sorensen, on his 100th appearance for Denmark, was too easily beaten by the swerving flight of a long shot.

The match pitted together two teams to have won their respective Euro 2012 qualifying groups and showed that Russia have greater momentum heading into the tournament's final straight.

Denmark almost hit back instantly from Shirokov’s early strike as Simon Poulsen turned in the box but shot straight at Vladimir Gabulov in the Russia goal.

After Bendtner’s miss, Roma center-back Simon Kjaer grazed the crossbar with a header from a corner on 28 minutes.

Shirokov then slammed straight at Sorensen running from deep before Arshavin made it two. It was Arshavin’s first goal for Russia since a 2009 strike against Azerbaijan in World Cup qualifying.

Seconds after the restart, Denmark substitute winger Tobias Mikkelsen broke clear and jinked around Gabulov, but shot from too tight an angle and the danger was cleared.

As the hosts upped the tempo, fellow sub Lasse Schone crossed for Mikkelsen to volley straight at Gabulov soon after.

Christian Eriksen wound a free kick around the Russia wall on the hour, but Gabulov got strong fists to the ball to punch clear.

Russia substitute Denis Glushakov then forced Sorensen into a full-stretched save with an effort from distance.

The visitors roamed forward with greater freedom as the half wore on with Denmark putting up surprisingly little resistance in midfield.

The Danes threatened late on as substitute Mads Junker came a hair’s breadth away from connecting with a cross from the left with 7 minutes remaining.

At the other end Kokorin shanked a left-footed shot to the right of Sorensen’s goal.

Jakob Poulsen failed to connect late on as the hosts’ search for a consolation goal ended in vain.