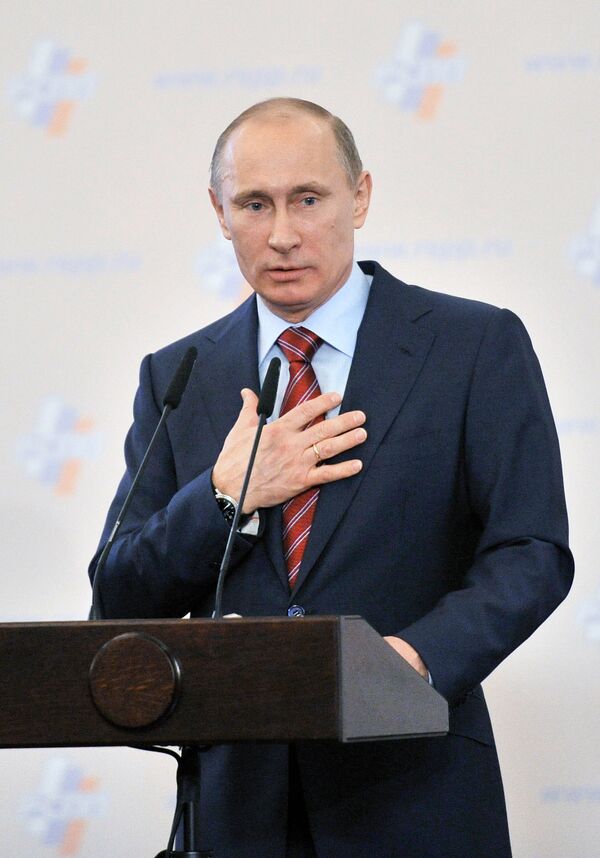 Prime Minister Vladimir Putin charged Monday that the United States pursues its interests to the detriment of world security and served notice Russia would continue to oppose this if he returns to the Kremlin.

Prime Minister Vladimir Putin charged Monday that the United States pursues its interests to the detriment of world security and served notice Russia would continue to oppose this if he returns to the Kremlin.

At the same time, however, Putin stated that close and trusting relations between Moscow and Washington were of signal importance for the world in turbulent times and made clear Russia wanted such ties if based on mutual respect.

In an lengthy article published in the daily Moskovskiye Novosti a week ahead of presidential elections he is widely expected to win, Putin outlined a broad vision of how he sees Russia’s place in the world and how he would aim to fortify it.

Putin took direct aim at US plans to place elements of a missile defense system in Europe near Russia’s borders and expressed exasperation at what he described as Washington’s stubborn refusal to take Moscow’s worries into account on it.

“I would not mention this topic if these games were not taking place right on Russia’s borders, if they had not undermined our security, if they did not work against stability in the world,” Putin wrote.

“Our arguments are well known and I will not rehash them again. But unfortunately, they are not accepted by our Western partners.”

Russia has long said that the US missile plans pose a direct threat to Russia’s nuclear deterrent. The United States denies this and asserts the planned system is designed to thwart missiles launched by “rogue” states.

The US-led NATO alliance, Putin said, had expanded to take in new members close to Russia, had overreached its authority in regulating international affairs and was establishing “facts on the ground” before the post-Cold War relationship between the bloc and Moscow could be worked out.

Putin said he agreed with those who argue that upholding human rights is the top obligation of sovereign states and said crimes against humanity should be punished by international courts.

Arguing however that the need to protect human rights justified outside military intervention in sovereign states without UN approval resulted in deaths, violation of those same human rights and unpredictable consequences, Putin wrote.

“Then we’re not talking about a noble cause but about elementary demagoguery,” he said.

The 59-year-old Russian leader expressed particular aversion to what he described as a concept of security among NATO members and particularly the United States which “fundamentally differs from ours.”

““The Americans are obsessed with the idea of ensuring their absolute invulnerability – a thing, I would point out, that is utopian and achievable neither from a technological nor a geopolitical standpoint.

Addressing the unrest in the Arab world, Putin said Russia would not permit a “Libyan scenario” to take place in Syria, where he said Moscow wanted to see an immediate halt in violence and a national dialogue to resolve the crisis.

He defended the decision by Russia and China to veto a resolution earlier this month pushed by Washington and its European and Arab allies that Moscow said would have opened the door to foreign military intervention in Syria.

Russia in particular faced blistering criticism that “bordered on hysterical” from Western countries for its decision, Putin said, adding that Moscow strongly hoped the United States and others would not resort to force in Syria without UN approval.

Referring more widely to the Arab Spring, Putin said that efforts backed by the United States and the West to bring about “democracy with the help of violent methods” were unpredictable and often led to precisely the opposite result.

“Certain forces, including religious extremists, are emerging who are trying to change the direction of development of these countries and the secular nature of their governments,” he said.

Putin noted the importance that social networks and mobile devices had played in uprisings in several Arab states last year and said “soft power” had been used by states to advance their foreign policy goals there without resorting to force.

At the same time, he warned, “soft power” and new communication methods were used to provoke extremism, separatism, nationalism, to manipulate public opinion and “interfere directly in the internal affairs of sovereign states.”

As he has in the past, Putin criticized non-governmental organizations that he said operated in one country but were paid for by another with the tacit aim of pushing the latter’s foreign policy objectives.

On Iran, Putin said Russia was “alarmed” by reports of possible preparations for a military strike to cripple Tehran’s nuclear activities, warning that if such a thing happened “it would have truly catastrophic consequences” on a massive scale.

He said the world should recognize Iran’s right to develop a civilian nuclear program, including enrichment of uranium, for energy production under close supervision of the International Atomic Energy Agency.

In addition to his direct criticism of US behavior on the world stage, Putin said some policymakers within the United States – notably in the US Congress – were unable to abandon Cold War-era stereotypes and phobias about Russia.

Despite some progress in bilateral Russian-American relations, outdated perceptions in the United States about Russia – along with what he called US “political engineering” in regions close to Russia – still had a negative impact on bilateral relations, he said.

Putin recalled however that in a 2007 meeting with former US president George W. Bush he had proposed a solution to resolve differences over missile defense which he said would have dramatically improved bilateral ties.

Putin said Russia’s proposals then on missile defense, which would have paved the way to a “qualitatively new, close and alliance-like model for cooperation in many other sensitive areas” were still on the table.

“In relations with the US, we would be ready to go really far and to reach a substantial breakthrough provided the Americans conduct themselves according to principles of equal and mutually-respectful partnership,” Putin said.

The Russian leader acknowledged that his country had had little success in establishing a more positive image for itself in the world and insisted that while he would defend his country’s interests Russia did not want to be isolated.

“We are ready to get to work on mutually-profitable cooperation, toward open dialogue with all of our foreign partners. We are working to understand and take account of the interests of our partners. We ask them to respect ours.”