No “Libyan scenario” for Syria – Putin 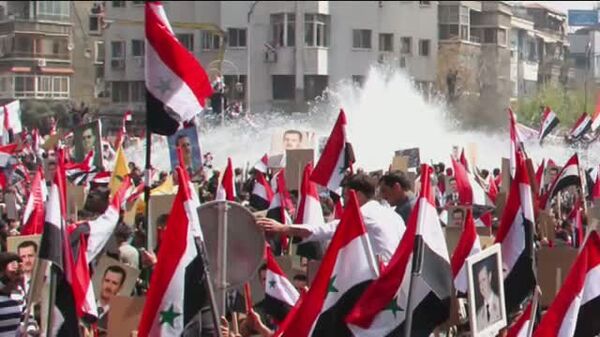 © RIA Novosti
Subscribe
Russian Prime Minister Vladimir Putin warned against a “Libyan scenario” in Syria, saying West-backed military intervention would not bring democracy to this Arab country but would rather compromise the existing system of international security by undermining the authority of the United Nations.

Russian Prime Minister Vladimir Putin warned against a “Libyan scenario” in Syria, saying West-backed military intervention would not bring democracy to this Arab country but would rather compromise the existing system of international security by undermining the authority of the United Nations.

“The implementation of a “Libyan scenario” in Syria should not be allowed,” Putin said in his campaign article on foreign policy, published in the Moskovskiye Novosti newspaper on Monday. Putin was referring to the recent regime change in Libya, which was implemented with the military support of several NATO countries.

Russia did not used its veto power in the UN Security Council to block intervention in Libya that was started under the pretext of protecting civilians there from the Muammar Gaddafi forces crackdown. In the article, Putin who is poised to return to the Kremlin as president after the March elections, called Gaddafi’s murder by the triumphant mob last October a “hideous outrage belonging not even to the Middle Age but to the Primitive Age.”

“Having learnt a bitter lesson, we oppose such resolutions by the UN Security Council, which can be interpreted as a signal for military intervention into Syria’s internal processes,” Putin said in the article.

According to him, global powers should work to achieve peace between the warring factions within Syrian society, what would create conditions that would support the democratization plans announced by the Syrian government.

Putin warned that efforts by the United States and other countries to bypass the Security Council veto by hammering up a coalition of the willing states and striking Syria would undermine the global security system by compromising the central role of the United Nations.

“Let me remind you that the veto right is not a whim but an integral part of the global system, codified in the UN Charter, by the way, upon insistence by the United States,” Putin said.

He also said that attempts to bring democracy through military intervention in the Arab world often backfires, with religious extremists coming to surface and trying to change the secular nature of government there.

Russia’s leader also referred to another aspect of the so-called “Arab spring”, that of Russian companies getting squeezed from their traditional markets by the companies from the states that participated in overthrowing regimes there.

“One can think that the tragic events have been to a certain extent inspired not by human rights concern but by someone’s interest in redistribution of the markets,” Putin said. He added that Moscow will work with the new Arab governments to quickly restore Russia’s economic position there.