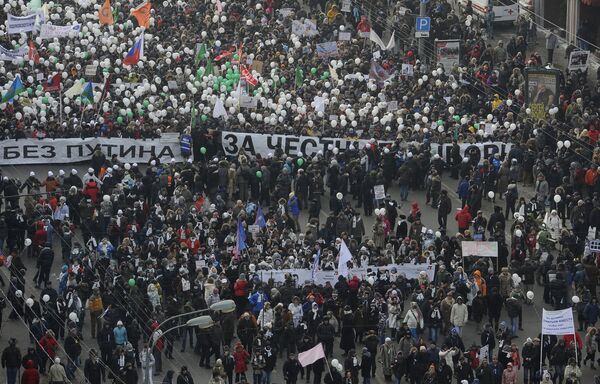 © RIA Novosti . Ramil Sitdikov
/
Go to the photo bank
Subscribe
Thousands of Russians opposed to Prime Minister Vladimir Putin's return to the presidency will form a human chain around central Moscow’s ring road on Sunday, a week before a presidential vote that is expected to cement his grip on power.

Thousands of Russians opposed to Prime Minister Vladimir Putin's return to the presidency will form a human chain around central Moscow’s ring road on Sunday, a week before a presidential vote that is expected to cement his grip on power.

Nearly 50,000 people have signed u via social networking for the White Streets rally on Moscow’s Garden Ring road.

Online activists are urging people to show up with white ribbons, symbols of the protest movement.

The opposition then intends to bid “farewell” to Russia’s “political winter” at Revolution Square just outside the Kremlin walls.

Putin, 59, is widely expected to triumph at the March 4 presidential polls, but his bid comes during the biggest show of dissent since he came to power in 2000.

A combined total of some 200,000 people in Moscow alone have attended demonstrations against alleged fraud in favor of Putin’s United Russia party at the December 4 parliamentary election.

Putin supporters in turn have pledged to hold their own rally at Triumfalnaya Square, the site for monthly gatherings of opposition groups defending Article 31 of the Russian Constitution – which guarantees the right to free assembly.

Participants will be holding placards and banners reading “Putin loves all” and “Only one week left before Putin’s victory,” organizers said.

They will also be taking photos of people who plan to cast their vote for Putin.