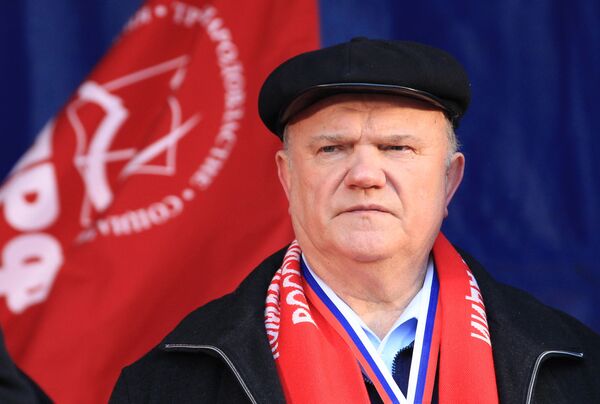 The biggest of three was the event by the Liberal Democrats on the downtown Pushkin Square, for which 3,500 gathered, about 1,000 more than the expected turnout, according to city police.

Drum-toting majorettes in white entertained the crowd before the main event, a speech by the party’s flamboyant leader Vladimir Zhirinovsky, who showed up in a grey army overcoat and a tall Cossack hat.

Zhirinovsky, who is running for president against Putin, spoke for almost an hour, touching in his speech on foreign policy, election fraud and faults of rival presidential candidates, primarily independent Mikhail Prokhorov.

Meanwhile, some 2,500 attended a Communist rally at the nearby Teatralny Proezd. The party’s presidential candidate, Gennady Zyuganov, urged the public in his speech to maximize turnout, ensuring a runoff.

“The more ballots, the better the chance of a runoff,” Zyuganov said.

The Communists have 300,000 vote monitors prepared nationwide to ensure no vote fraud takes place at the presidential elections on March 4, Zyuganov said. The parliamentary vote in December was marred with allegations of widespread vote rigging in favor of the winner, Putin’s United Russia, though courts threw out the majority of complaints.

About 1,000 attended the event by the VDNKh metro station in the Northeastern Administrative District, organized by conservative political pundit Sergei Kurginyan and his supporters.

The event was to oppose dangers of a possible “Orange revolution,” a regime change through street protests like in Ukraine in 2004. Participants also promoted “USSR 2.0,” calling for a restored version of the Soviet Union.

Kurginyan, who is also a theater director, performed a song about current political events to an acoustic guitar at the rally.

Kurginyan was the organizer of a mass rally on February 4, set to oppose massive anti-government protests ongoing since the parliamentary vote in December. The rally, which gathered tens of thousands, was supported by authorities, but Kurginyan denied any ties to Putin and refused to participate in a pro-Putin rally on Thursday.