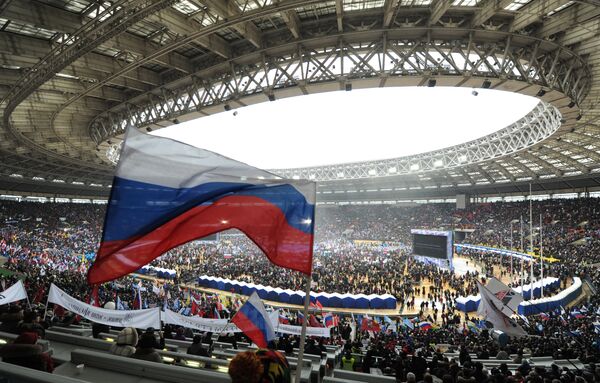 © RIA Novosti . Alexei Filippov
Subscribe
International
India
Africa
Tens of thousands of people packed into a Moscow sports stadium Thursday in a massive and well-organized display of support for Prime Minister Vladimir Putin 10 days ahead of a contentious presidential election widely expected to usher the Russian prime minister, who has already served two terms as president, back to the Kremlin.

Tens of thousands of people packed into a Moscow sports stadium Thursday in a massive and well-organized display of support for Prime Minister Vladimir Putin 10 days ahead of a contentious presidential election widely expected to usher the Russian prime minister back to the Kremlin.

“We are the defenders of the fatherland!” Putin told a crowd of an estimated 130,000 supporters at the Luzhniki rally on Thursday, which is Defender of the Fatherland Day in Russia.

The pro-Putin gathering was the latest in a series of public demonstrations, unprecedented since the immediate aftermath of the collapse of the Soviet Union in 1991, by large crowds of both supporters and opponents of the Russian leader and the political system associated with his stewardship of the country.

Police said 130,000 gathered at the stadium prior to Putin’s arrival, despite City Hall capping attendance at 100,000. The venue has seating for 78,000 people but there were many thousands more participants waving flags, brandishing pro-Putin banners and listening to musical performances who gathered on the field itself.

The rally was preceded by a march along the banks of the Moskva river through central Moscow to the stadium and in which police said around 30,000 people took part. Thursday was a public holiday in Russia, giving most voters the day off and reducing the usual traffic congestion in the city center.

The stadium, however, appeared packed well in advance of Putin’s appearance, with people thronging both the tribunes and the field. Several artists, including Grigory Leps, a Russian singer popular in particular with Russia’s working class, performed before the crowd.

Many of the banners held by participants at the rally bore the photographs of Putin’s face that were used for the cover of the US weekly magazine Time, when it selected Putin as its “Man of the Year” in 2007.

Some participants at the rally held flags and placards with slogan such as “We won’t let them ruin the country!” “Who, if not Putin?” “Vote stability – Vote Putin.” Patriotic songs from Soviet times blared out during the march to the stadium.

The Union of Machine Builders, the country’s biggest industrial lobby group, and the Russkoye Moloko dairy company were some of the groups who attended in an organized fashion and with their own banners. Many other participants also sported identical attire and banners, though some carried their flags folded.

Some Russian media said authorities sought to boost attended by pressuring state employees to attend the rally. Organizers denied that anyone had been pressured to attend.

Putin was greeted with a round of chants when he took the stage dressed in a black anorak, however, some boos were also heard during his march through the crowd.

“Do you love Russia?” Putin asked the crowd, which responded with loud shouts of “Yes!”

“We won’t allow anybody to interfere into our internal affairs and impose their will on us because we have our own will,” Putin said. “We are a nation of victors. It’s in our genes.”

“Please, let nobody run abroad and betray their fatherland,” he said. He did not elaborate, but his supporters earlier accused participants and leaders of recent anti-government protests of being paid by Western powers.

“We will win, but winning at the elections is not enough,” Putin said. “We need to overcome a multitude of problems such as injustice, rudeness of officials, poverty and inequality,” Putin said.

“I dream about a time when everyone in our country, big bosses and simple citizens, live in the right and honest way. It will make us stronger,” Putin said.

“The battle for Russia is raging on. We’ll be victorious,” Putin said, wrapping up his speech, which was followed by a show of his favorite folk rock band Lyube.

Speakers at the event also included conservative political pundit Mikhail Leontyev, Moscow mayor Sergei Sobyanin, famous pilot and head of the MAKS airshow Magomed Tolboyev and Urals factory worker Igor Kholmanskikh, who became an overnight celebrity in December after promising to travel to Moscow and personally crack down on Putin's opponents, during a call-in show with the prime minister.

The political demonstrations of the past two months were kicked off by Putin’s opponents in December following the slim victory of his United Russia in parliamentary elections on December 4. Opposition groups have claimed that the vote was marred by widespread cheating and three large opposition rallies since then gathered tens of thousands of people each, a protest turnout unseen in Russia since the early 1990s.

Putin’s supporters responded to the latest opposition event on February 4 in Moscow with their own event elsewhere in the city, triggering a string of duelling political rallies in the Russian capital and elsewhere in the country. Both sides have attracted tens of thousands of supporters to their gatherings.

Elsewhere in Moscow on Thursday, meanwhile, the Communist Party, the ultranationalist Liberal Democrats and a group of conservatives headed by political analyst Sergei Kurginyan held separate rallies of their own. Many roads in the capital were closed to traffic for part of the day.

The Communist rally gathered an estimated 2,000 people, while the Liberal Democrats led out some 1,500 people, city police said. Another 1,000 attended Kurginyan's rally.

A round of rallies by the Communists and the Liberal Democrats, both of whom are fielding their own candidates for the Kremlin vote, took place in the far eastern part of Russia, including Vladivostok and Khabarovsk, however, turnout stood in the dozens for each event.

Public events by Putin supporters and rival political parties were also held across Siberia. Most of them also attracted less than 100 participants each, though some 200 rallied in Buryatia’s capital Ulan Ude, local police said, and up to 500 came out to the streets of Novosibirsk in western Siberia, according to unofficial police estimates. All rallies were sanctioned. Also, around 1,500 participated in separate rallies in cities of southern Russia.

Polls indicate that Putin remains by far the frontrunner for the Kremlin vote on March 4, but he faces increased opposition among the country’s growing middle class, disgruntled with his plans to return to presidency after two stints at the job between 2000 and 2008. Opposition groups have said they plan to hold further protests after the vote in the likely event that Putin claims victory after the first round.