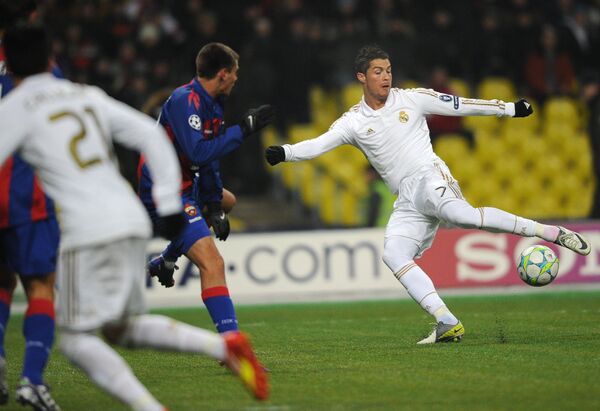 CSKA Moscow debutant Pontus Wernbloom lashed home an injury-time volley to salvage a 1-1 draw against Real Madrid in the first leg of their Champions League last-16 tie on Tuesday.

The Swede, who joined CSKA earlier this month, connected with a cross-header from Alexei Berezutsky to earn a last-gasp draw.

Cristiano Ronaldo had given the visitors the lead in the first half, smashing in a left-footed half-volley from Fabio Coentrao's cross.

It snapped Real's perfect six-game win streak in this year's competition. The second leg is March 14.

"It was great to get the injury-time goal and it really gives us a chance going into the second leg," CSKA coach Leonid Slutsky said.

"Wernbloom is the hero with the goal, of course, but he played a good defensive game on the whole."

"We had our chances especially in the second half but we didn't convert them. ... [But] In the end, I'm satisfied with the result," Real coach Jose Mourinho said.

"Our opponents were tough, and the match was hard. They did very little to score, but they got their goal. They were very happy to get that."

Real had the better of the game on the Luzhniki Stadium's artificial pitch and would have taken a far greater advantage into the second leg if it weren't for CSKA's second-choice goalkeeper Sergei Chepchugov, who had a stand-out game coming in for injured captain Igor Akinfeev.

CSKA coach Leonid Slutsky handed debuts to two winter signings in midfielderWernbloom and winger Ahmed Musa but neither did much to trouble the visitors until the the former struck at the death.

Karim Benzema then dragged a half-hearted shot wide from distance, but pulled a thigh muscle that forced his substitution for Gonzalo Higuain.

Chepchugov made a reaction double-save on 17 minutes, first padding away Higuain's low drive and then deflecting Sami Khedira's follow-up over the crossbar.

At the other end, Seydou Doumbia climbed above Alvaro Arbeloa but could only head a 40th-minute effort wide from Evgeny Aldonin's cross.

Aldonin sliced a long shot past the post before Higuain rolled a tame effort straight at Chepchugov.

Real started the brighter in the second half, with Jose Callejon skewing wide from a good position after combining with Ronaldo.

The former Madrid youth player tried to walk the ball into the net moments later, but Chepchugov got down fast to block as the visitors found CSKA easier and easier to contain.

Ronaldo then thumped a volley over after CSKA failed to clear a Mesut Ozil free kick.

Debutant Musa was an occasional threat down the right flank and burst through on a rare CSKA counterattack on the hour mark, hitting straight at Iker Casillas.

CSKA subsitute Keisuke Honda, coming back from a long-term injury, then struck a harmless free kick at the Spanish goalkeeper.

Ronaldo could have doubled the lead on 76 minutes, jumping clear of the CSKA defense but having his shot from a tight angle saved by a full-stretch Chepchugov.

Honda curled in a free kick from the right that Casillas opted to punch clear, causing a rare moment of panic in the visitors' penalty area.