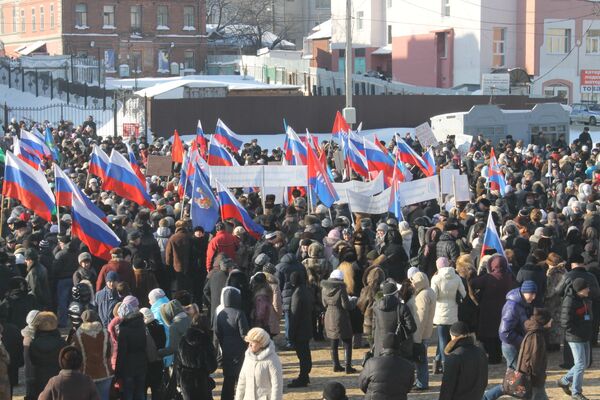 In Khabarovsk Putin supporters went to the streets with the slogan “We have something to protect!” The demonstration, organized by the All-Russia People's Front was attended by 12,000 people. The slogan “Orange Revolution Leads to a Banana Republic” drew a lot of attention. Speakers at the demonstration claimed that Khabarovsk region felt the support of Russian government: there one could see reconstruction of plants, construction of social housing and establishing of new businesses.

In Irkutsk the demonstration “Angara Region for a Stable and Strong Russia” gathered about 7,000 people. Teachers, athletes, military men, employees of industrial enterprises of the region spoke in support of the current policy, presidential candidate Vladimir Putin and against the revolutionary changes in the country.

The demonstration in Vladivostok, organized by the Trade Unions of Primorye, was held with the slogn "Primorye for Stability." According to the police, the rally gathered about 4,000 people. Many of participants put vests with colors of Russian flag and signs on the back "I am for Putin." Participants of the meeting adopted a resolution addressing the presidential candidate saying that if he wins the election he will give priority to the improvement of federal labor laws and social guarantees.

Tyumen regional council of trade unions organized a meeting "For Decent Election". According to the council, the meeting was attended by about 5,000 people. According to the city administration, more than 4,000 people participated in the event. Those who came to the rally were holding Russian flags and posters with slogans "Teachers of Tyumen Region for Putin," "Everything will be ok," "We believe in Putin," "Where Putin is, there is victory," "We are for stable tomorrow," "Evolution not revolution."

According to the police, demonstration in support of Putin in Volgograd with the slogan "Great country needs a strong leader", gathered about 10,000 people. The rally was organized by trade unions of Volgograd and All-Russia People's Front. Among those who came to the demonstration was the Governor of Volgograd Region Sergei Bozhenov. Despite the freezing weather, the rally lasted more than 2 hours.

In Lipetsk demonstration "For stable Russia" organized by local trade unions was held on a central square. The speakers expressed their support for presidential candidate Vladimir Putin. The participants were holding posters "We will not let destroy Russia," "We do not want to return back to 1990s," "We're on the right way." The rally ended with a concert of local music groups.

Over 8,500 people attended a demonstration in Nizhny Novgorod in support of presidential candidate Vladimir Putin. The rally was held on the square of Narodnogo Yedinstva [People's Unity] at the monument to Minin and Pozharsky, near the very Church of St. John the Baptist, where 400 years ago Nizhny Novgorod mayor Kozma Minin called the locals to stand up for their country.

In St. Petersburg the demonstration gathered about 60,000 people. Participants of the rally for political stability and support for Putin called to vote in presidential elections for the current prime minister and to prevent the revolution in Russia. At the end of the rally participants adopted a resolution stating that, despite the fact that everyone has their own beliefs and demands “all of us united by one desire to have confidence in future.”

As for Moscow supporters of Russian Prime Minister Vladimir Putin are planning to organize a car rally in central Moscow on Saturday. Up to 1,500 people are expected to take part in the demonstration planned for Saturday evening. A remix of Putin's vocals of the popular jazz song Blueberry Hill will become the symbol of the rally, the organizers said, adding that CDs with the song will be distributed among rally participants.